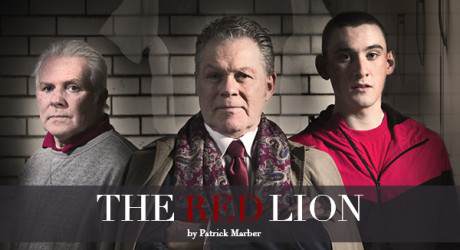 Presented in association with The Palace Theatre, Kilmarnock

It will tour to 16 venues in Scotland ending with a week’s run at the Theatre Royal, Glasgow.

The Red Lion FC is an English non-league side that has dreams of the big time.

However, the club’s manager, Kidd, will stop at nothing to realise his own ambitions of achieving money and fame. So, when young Jordan, who ‘plays like a God’, joins the club, Kidd sees his golden opportunity.

One man stands in his way. The kit-man, Yates – club legend and footballing ‘hero’ - has other ideas.

A ‘Clash of the Titans’ ensues between Yates and Kidd over the future of Jordan and the football club.

Award-winning writer, Patrick Marber’s hit play unfolds like a Greek Tragedy, transcending ‘the beautiful game’, in a tale of heroism, hubris and handballs!

Patrick Marber commented: “I am thrilled Rapture Theatre are giving ’The Red Lion’ its Scottish premiere and very excited to see this terrific cast performing in a country that loves football with a passion.”

Director, Michael Emans, said: “Having been a huge fan of Patrick Marber since I was at drama school, it is a fulfilment of a long held ambition to direct one of his plays.

“Patrick, in his writing, combines humour, pathos and a sensitivity to the human experience that is deeply moving.

“When I first read The Red Lion in 2017, I knew that I had to direct it: the way Patrick used the milieu of the local football club as a microcosm of the wider world, to explore the themes of collective ethic versus individual ambition and the way the play articulated the need and desire to both be heroic and to have heroes in your life, I found to be totally compelling.

“We seem to live in world of villains both political and otherwise so a play that focuses on heroes, tragic heroism and the hubris of the individual feels prescient. Like all the best tragedies it also very very funny!  I hope that audiences, like me, can fall in love with this wonderful play!”

Alongside the production, Rapture will be running a series of post-show discussion panels. Rapture is working in partnership with Show Racism the Red Card (SRTRC) to help raise awareness of issues such as racism, sexism and bullying, which can still occur within the game of football.

These post-show events will offer a great opportunity to engage with community groups and audiences and promote the significant work Show Racism The Red Card undertake, as well as discussing the themes raised within the play. Rapture want to provide an insight into the philosophy, passion and behind the scenes workings of a football club.

The panels will consist of director, Michael Emans, members of the cast and invited guests from local football clubs and SRTRC.

Palace Theatre Kilmarnock Preview 8 May and 9 May 7.30pm

NB: There will be a post show discussion lasting 30 minutes at each venue

The company’s productions entertain and stimulate audiences, enabling the audience to marvel at the modern relevance and the timeless nature of each play’s themes and ideas.

Rapture’s work is aimed at regular theatregoers, first time attendees, and both young and mature audiences. Rapture regularly works with prestigious and popular casts and creative teams and tours its work across Scotland.

John has had a long and illustrious career in television and stage. He is probably best known from his portrayal of Billy Corkhill in Brookside (C4) in the 1980s but has recently been seen on our screens in the popular series, Emmerdale (ITV).

We are delighted to have John lead the cast as Yates, the Kit Man with a long history with Red Lion FC.

Brendan has recently been part of the cast in ITV’s long running and well-loved soap, Coronation Street.

Brendan has a long career with Theatr Clywd and has appeared in many productions including most recently: Uncle Vanya, Insignificance, The Herbal Bed, Under Milk Wood, The Aristocrats and Glengarry GlenRoss and many more.

We are pleased to have Brendan join The Red Lion cast as Kidd, the manager who will stop at nothing when he sees an opportunity.

Harry graduated from LAMDA in 2018. He played Sammy in the hit series Angel. He has also appeared in a number of popular TV series, including Doctors, Moving On, All at Sea, Common and Massive (BBC).

We are pleased to welcome Harry to Rapture Theatre playing the young star player Jordan in The Red Lion.

Michael trained at Rose Bruford College of Speech and drama.

Marber’s first play was Dealers Choice, which he also directed. It opened at the National Theatre in February 1995, and won the Evening Standard Award for Best Comedy. Also in 1995, After Miss Julie, a version of the Strindberg play Miss Julie, was broadcast on BBC TV. It was first performed in 2003 at the Donmar Warehouse, London and in 2009 at the American Airlines Theatre on Broadway.

His play, Closer, a comedy of sex, dishonesty, and betrayal, opened at the National Theatre in 1997, again directed by Marber. This won the Evening Standard award for Best Comedy, Critics’ Circle Theatre and Laurence Olivier awards for Best New Play. It has proved to be an international success, having been translated into 30 languages, and a screen adaptation, written by Marber, was released in 2004, directed by Mike Nicholls.

His next play, Howard Katz, was first performed in 2001, at the National Theatre. His play for young people, The Musicians, about a school orchestra’s visit to Russia, was performed for the National Theatre’s Shell Connections programme in 2004, its first production being at the Sydney Opera House.

Don Juan, his contemporary rendering of Molière’s comedy, Dom Juan, opened at the Donmar Warehouse in 2006, directed by Michael Grandage. He also co-wrote the screenplay for Asylum (2005), directed by David Mackenzie, and was sole screenwriter for the film, Notes on a Scandal (2006), for which he was nominated for an Oscar.

Marber is a director of Lewes FC, driving forward a scheme for the club to be community-owned since July 2010.

MEDIA RELEASE issued by Shirley Monteith – Rapture Theatre. You too can share your stories (aka press or media releases), on this site. Email here for more information.