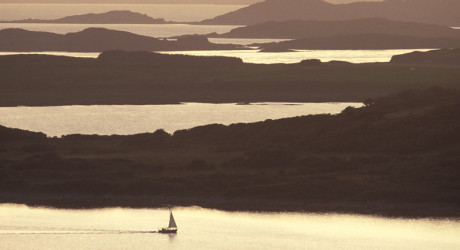 A visual odyssey of adventure, exploring one of the world’s most alluring natural environments

AWARD-winning, internationally-travelled landscape photographer, Allan Wright, demonstrates his unique ability to evoke and capture the spirit of the land – whenever and wherever he treads.

No more so than in Scotland’s Islands, one of two new stylish publications launched today, packed with over 200 stunning photographs that he taken over the years.

Whether weaving a course northwards on Scotland’s famously beautiful west coast – through the Sound of Mull, the Inner Hebrides, the Small Isles and on out to the Western Isles, including remote St Kilda – or surfing the wind with the birds on Orkney’s perilous cliff-tops and on to the most northerly and dramatic Shetland Islands, neither photographer nor writer are strangers to Scotland’s seaboard.

Wright, an explorer at heart, has spent many years as a lensman, journeying onshore and off.

He says: “There is nothing I enjoy more than the encounter and challenge involved in zeroing in on the moment to capture that once-in-a-lifetime shot.”

And on witnessing the sun setting on a Lochranza stag party or rising over a herd of glistening grey Highland ponies, readers too are invited to share these very special moments.

“This portfolio of photographs,” he observes, “exists by virtue of my being held captive by the beauty and atmosphere of these islands and whereas I enjoy my job immensely, it is still work.

“In general and in practice I will claim that it is the land that seems to speak to me, although I do also shorten the odds by making precise logistical calculations for some shots. It is humbling and gratifying to encounter lyrical moments of fleeting beauty. The famously changeable nature of Scottish light, especially on the west coast, means an alertness and readiness to move on opportunities is very much part of the game. I see my role in this process as a receiver transmitter, summed up well by Yann Arthus-Bertrand whose statement: ‘The earth is art, the photographer is only a witness’, speaks volumes about the role we photographers play in creating landscape consciousness.”

Allan Wright is one of Scotland’s foremost landscape photographers whose career began in the 1980s.

Since then, his award-winning work has become widely acclaimed and keenly anticipated by fellow photographers; by artists, lovers of nature and wildlife; by walkers and climbers; by visitors to Scotland and by armchair travellers alike.

His native Scotland, however, remains his burning passion and he excels in capturing the variant moods and lyricism of its timeless landscape. Previous best-selling publications include Skye (second edition out now) Galloway, Glasgow, Arran plus many other titles.

Marianne Taylor is a Glasgow-based journalist and broadcaster. Recently appointed as The Herald’s new literary editor, she has also worked for the Guardian, the Times and Die Welt, covering politics, culture, society and travel.

She is especially inspired by her native landscape – among her recent columns is The Herald’s Scotland’s Insider Guide. It is clear that the land, its people and their history touch her deeply. Marianne’s personal experiences of visiting many of Allan’s featured islands add a refreshing dimension to Scotland’s Islands – a document of our time.

Scotland’s Islands is one of two new books published this week by Allan Wright.

“Tractors are like people, the older they get the more interesting they become!”. RM

A marvellous photographic chronicle of a bygone era that pays tribute to the tractor in its many guises.

* The personal reflections on a life with tractors by Ayrshireman, Russell McNab.