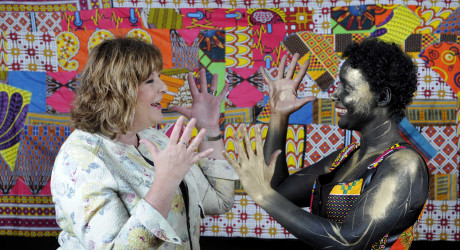 FIONA Hyslop, Cabinet Secretary for Culture, Tourism and External Affairs, today announced the companies, ensembles and artists selected for the 11th year of Made in Scotland – the curated showcase of music, theatre and dance performed during the Edinburgh Festival Fringe.

Through funding from the Scottish Government’s Expo Fund, Made in Scotland is a partnership between the Edinburgh Festival Fringe Society, Creative Scotland, the Federation of Scottish Theatre and the Scottish Music Centre.

A total of £550,000 has been received from the Expo Fund which has enabled Made in Scotland to present 22 artists, companies and ensembles this year, including six world premieres. Approximately £100,000 of this funding goes towards onward touring to enable artists and organisations to take up future opportunities with contacts made with industry professionals during the Festival Fringe.

Made in Scotland goes from strength to strength each year, winning many plaudits and accolades along the way for the quality of the work being presented on stage. The showcase is widely recognised as one that not only celebrates the wealth of work being made in Scotland but enables Scotland-based artists and companies to act as ambassadors to worldwide audiences.

2019 sees the inaugural Made in Scotland Festival in Brussels, which will see six dance, theatre and music performances being performed in Belgium in June.

Since its inception in 2009, Made in Scotland has supported over 150 companies, ensembles and artists to to deliver over 200 shows at the Fringe. The onward touring fund has enabled 91 productions to tour across six continents, visiting 42 countries.

Playwrights’ Studio Scotland returns with TalkFest 2019 to provoke discussion around what stimulates the artists behind this year’s Made in Scotland showcase and the wider Edinburgh festivals and Fringe.

These workshops and discussions are led and chaired by some of our leading playwrights and theatre-makers and this year includes Mara Menzies, Oliver Emanuel, David Greig, Douglas Maxwell, Jenny Lindsay, Nicola McCartney and Dritan Kastrati.

She added: “This is the 11th year of the Made in Scotland showcase with 22 shows supported in this year’s programme, backed by £550,000 from the Scottish Government’s annual Expo Fund. The breadth and depth of home grown talent participating in the programme represents a roll call of gifted Scottish-based performers. It provides artists with an international platform that will enhance Scotland’s reputation as the UK’s most cultural nation, a finding highlighted in a recent British Council survey.”

Shona McCarthy, chief executive, Edinburgh Festival Fringe Society, said: “The 2019 Made in Scotland Showcase once again highlights the brilliant and compelling work that artists and companies are creating here in Scotland today.

“This year, sees 22 productions, including six world premieres, with a diverse range of stories and themes explored across theatre, dance and music. The Edinburgh Festival Fringe Society is proud to work alongside our partners at Creative Scotland, Federation of Scottish Theatre and the Scottish Music Centre to present this work in a global arena. The Edinburgh Fringe is recognised as the world’s biggest annual exhibition of contemporary performing arts and an exceptional international platform for Scottish work to be seen, appreciated and selected for touring by arts industry from around the world.

“The Scottish Government’s Expo fund makes Made in Scotland and its Onward Touring Fund possible and provides crucial support for Scottish artists to avail of this unique platform. It is an exciting development to see the inaugural Made in Scotland Festival kick off in Brussels this June.”

Laura Mackenzie-Stuart, head of Theatre, Creative Scotland, said: This year’s showcase embraces creative inspiration from the very local to global continuing Made in Scotland’s important role as a calling card for international theatre, dance and music peers, programmers and audiences. The range of themes and partnerships reveal an appetite amongst Scotland’s artists to lead on and contribute to contemporary story-telling in distinctive and varied performative forms regardless of creed or borders. Thanks to the Scottish Government’s Expo Fund, their work is ideally placed to grasp the astounding opportunity which the Edinburgh Festival Fringe offers every August.”

Jude Henderson, director, Federation of Scottish Theatre, said: “This vital investment by the Scottish Government supports the selected artists and producers to engage effectively with key figures at one of the top international industry events. It also helps to create and support international touring opportunities for our members, enabling our industry to develop new partnerships and expand into new markets. FST is delighted to continue working with our partners on this important project.”

Gill Maxwell, executive director, Scottish Music Centre, said: “Working in partnership with the Edinburgh Festival Fringe Society, Creative Scotland and the Federation of Scottish Theatre, the Scottish Music Centre is delighted that this year’s 11th edition of Made in Scotland will present nine world-class music shows.

“Highlighting the quality and diversity of Scotland’s composers, songwriters, musicians and artists, this impressive programme presents new Scottish music from across all genres: from electric and acoustic multi-artist showcases to solo instrumentalists, contemporary classical and jazz ensembles to new twists on folk music and ingenious specially crafted music-making for children, this year’s wide-ranging line-up offers something for every music lover.”

2019 Made in Scotland programme

Joel Brown and Eve Mutso: 111 (one hundred and eleven)

Ancient mythology and modern storytelling collide in a contemporary exploration of the legacy of colonialism and slavery by award winning Scottish Kenyan storyteller, Mara Menzies.

Northern Ireland, 1989. Meghan Tyler’s surreal new play is a grotesque, black comedy celebrating sisterhood whilst reminding us that the pressure cooker of The Troubles is closer than we imagine.

A live jam of music, video and poetry, this multimedia theatre show tells the true story of a military drone’s life and fears. Drone is mixed new every night: a cabaret band of a video jockey, an electronic musician and a spoken word performer.

Ultimate Dancer: For Now We See Through A Mirror, Darkly

This mystical and eerie dance performance is about the connection between what we see and what we believe. Audio description and captioning are embedded within the show.

ThickSkin and Traverse Theatre Company production, co-produced with Tron Theatre and Lawrence Batley Theatre: How Not to Drown

Award-winning theatre company, ThickSkin, returns to the stage with an action-packed, highly-visual production. A painful yet uplifting true story of a child asylum-seeker arriving in the UK.

Epic storytelling, intimately staged with a contemporary Scottish folk-inspired score. The cast live-record and layer their voices to create an ethereal adventure for the ears and imagination.

KID_X by Bassline Circus and MHz in association with Feral: Kid_X

Charting a futuristic romance between a boy with a bionic heart and a famous rooftop selfie queen, KID_X collides circus and street dance (Flexin, Krump, BoneBreaking) with hypnotic video projections and an original electronic score.

A magical first circus experience for babies aged 0-18 months. Roll up for a gently thrilling performance with spectacular balances, astonishing tumbles and inventive juggling. Be transported into a joyous, topsy-turvy world where patterns fill the air and anything is possible.

Cade and MacAskill in association with Take Me Somewhere Festival: Moot Moot

Borrowing from the genres of documentary podcasts and horror films, The Afflicted is a highly physical, visual piece of dance theatre and the inaugural production of new Scottish company groupwork, made up of a team of multi-talented, award-winning artists.

An intergalactic adventure for starry-eyed 2-6 year-olds and their adults. Inspired by women in space, this immersive performance captivates children and adults alike with a combustible concoction of experiments, rocket launches and stargazing.

Cryptic presents Kathryn Joseph: From When I Wake

A genre-busting line-up of virtuoso performers present work inspired by Muriel Spark, one of Scotland’s most celebrated writers. Infused with Sparkian drama and pathos the music draws the listener into intimate soundworlds where breezy melodies melt seamlessly into freewheeling collective improvisations.

Rocks will be drawing influences from her traditional roots and cutting-edge contemporary music to explore the impact of migration on people from countries such as Canada, Holland, Israel and of course, China. A homage to immigrants worldwide which will leave you spellbound.

theSpace on the Mile (venue 39)

A festival within a festival. Intimate. Epic. Take a seat in its gigantic walnut mahogany musical hug. Wild and wonderful #Pianodrome house band S!nk bring you to life with a full spectrum of new music and movement in their traveling 100-seater amphitheatre made entirely from upcycled pianos.

Scottish Jazz and Beyond: Parts 1/2/3

Part 3: Tom Bancroft’s In Common features Sharat Chandra Srivastava on violin and the voices of Sophie Bancroft and Gina Rae.

Piandrome at The Pitt (venue 391

An unique interactive, musical sensory space for all. Suitable for children of all ages, this magical sensory space invites its visitors to create soothing musical landscapes using objects and tactile materials, turning the space into a playful digital instrument

The Night With: The Night with Lunchtimes and Evenings

Young Night Thought brings together Scots folklore, song, film, artwork and dance in an exploration of the ‘inner child’. Flanked by a live band, Kirsty Law leads the audience across the threshold of the supernatural and back again.

• For details of the full 2019 Made in Scotland programme visit: www.madeinscotlandshowcase.com

• raises the profile of the work of Scottish dance, theatre and music companies/artists and offers them unique networking opportunities with promoters;

• increases the number and diversity of international promoters coming to see Scottish work at the Fringe through a year-round promoter development programme;

• nurtures and encourages international creative dialogue and the development of international collaborations by Scottish dance, theatre and music companies/artists;

• supports international touring opportunities for all Scottish dance, theatre and music companies/artists performing at the Fringe;

• offers a year-round programme of training, support and advice to companies/artists so they can maximise the impact of their appearance in the showcase.

• The Scottish Government’s Edinburgh Festivals Expo Fund is available to all 12 festivals, to support the development of Scottish-based work and to allow that work to reach international audiences through presentation at the Edinburgh Festivals.

• The Made in Scotland programmes were selected by a panel of arts experts. Full details on panel members can be found on: www.madeinscotlandshowcase.com

• Full information on national and international touring opportunities for companies who have been part of the Made in Scotland showcase since 2009 can be found on: www.madeinscotlandshowcase.com