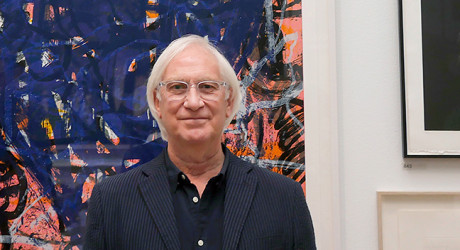 THE director of Glasgow Print Studio, John Mackechnie RSA, has been recognised for his services to art in the Queen’s Birthday Honours List 2019.

In a statement, John said: “I am surprised but delighted to have been awarded an MBE in the Queen’s Birthday Honours. It is heartening that my 36 years at the helm of Glasgow Print Studio has been recognised and, hopefully, also my own work as a visual artist.

“I was already feeling very pleased with myself this year having had a work of mine acquired for the collection of the Metropolitan Museum of Art, New York, and having a couple of works in the Royal Academy Summer Exhibition, but this tops the lot.”

John Mackechnie graduated in drawing and painting from Glasgow School of Art in 1971 before going on to post-graduate studies in printmaking at the University of Brighton. He was a printmaking tutor at the University of Northumbria for a number of years until returning to Glasgow Print Studio to take up a post as an evening class tutor, quickly climbing through the ranks to become firstly the Workshop Manager and since January 1983, director.

John has specialised in printmaking ever since, exhibiting prolifically throughout the UK and abroad in solo and mixed exhibitions. He was elected to the Royal Scottish Academy in 2005.

It is true to say that, without the vision of Mackechnie, the artistic quarter in the Trongate area of the city may never have come to fruition. It was his proposal in 1996 that eventually bore fruit in the expansion and refurbishment of the Trongate 103 building [1].

John turns 70 later this year and a major exhibition of his work is planned to take place at Glasgow Print Studio in 2020 in celebration.

Glasgow Print Studio (GPS) was founded in 1972 as an artist led initiative providing facilities and workshop space to artists using fine art printmaking. The print studio promotes contemporary and innovative printmaking through collaborative projects, supporting artists, exhibitions, learning and conservation. GPS is registered as a charity in Scotland, is funded by Creative Scotland and supported by Glasgow City Council.

Fruitful relationships have developed with established artists such as Elizabeth Blackadder, Adrian Wiszniewski and John Byrne, who work collaboratively with the Studio’s master printers. The Studio offers both traditional and digital printing facilities and uses its expertise to work with contemporary galleries like The Modern Institute. Over forty years after its establishment, Glasgow Print Studio continues to play a vital role in encouraging and supporting a vibrant artistic community.

[1] Trongate 103 was the first phase of the redevelopment programme to create an Arts Quarter. It was formed as a creative hub, giving access to linked galleries, a restaurant, exhibition areas, artist studios and workshops. Costing £8.5m, Trongate 103 was designed to cement the city and Scotland’s reputation as a cultural centre and to enable the groups to work closer together in purpose-built surroundings.

MEDIA RELEASE issued by Naomi Brown – Glasgow Print Studio. You too can share your stories (aka press or media releases), on this site. Email here for more information.