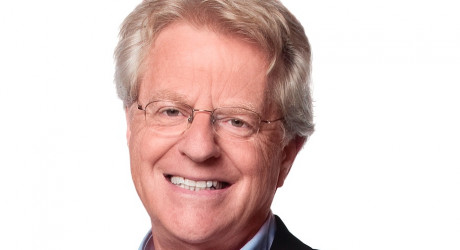 TV Icon. Journalist. Politician. Subject of opera. Jerry Springer has an unique place in popular culture, and he is to take to the Edinburgh TV Festival stage to deliver the Alternative MacTaggart, it was announced today (THURS).

Springer will give a short speech ahead of a Q&A with head of News and Current Affairs at Channel 4, Dorothy Byrne, in which he will discuss his long career hosting The Jerry Springer Show, which ran for 27 seasons from 1991 to 2018, as well as his views on the interplay between politics and the media.

UK-born Springer has described himself as a ‘political junkie’ and began his career as a former political campaign adviser to Robert F. Kennedy before becoming mayor of Cincinnati.

His broadcasting career began with a stint as a political reporter and commentator on Cincinnati’s NBC affiliate, WLWT. He subsequently became the station’s number one news anchor where he created his signature line: “Take care of yourself, and each other,” and won several local Emmys.

His eponymous TV talk show originally began as a politically-themed series before it was revamped to focus on more sensationalist stories. It became famous for its confrontational style with families taking each other to task over issues such as homosexuality and prostitution, attracting record ratings.

Springer will share his views on politicians’ relationship with the media and what part traditional news organisations can play to uphold democratic debate in an era of ‘fake news’.

Jerry Springer said: “Clearly, one of the most beautiful cities in the world – it’s an honour to be asked to speak, usually I’m being asked to be quiet!”

Advisory chair, Kelly Webb-Lamb, said: “As the king of the tabloid talk show, who better to hear from right now? And with Dorothy Byrne by his side, it’s definitely Box Office. The popcorn is already in the microwave.”

Executive chair, Graham Stuart, said: “He is the legendary Godfather of tabloid television. Could there be a more relevant time for him to bare his soul at Edinburgh?”

The session will take place on Friday 23rd August and will be produced by Jane Millichip, chief commercial cfficer, Sky Studios.

Jerry Springer was booked by the festival’s head of talent, Ian Lamarra. The Alaska TV creative head has secured other high-profile talent in this year’s programme, including Hugh Laurie and Paul Feig.

The TV Foundation will also take control of long-running talent schemes The Network and Ones To Watch, supported by YouTube, as well as more recent year-round initiatives including the Social Mobility Summit and New Voice Awards.