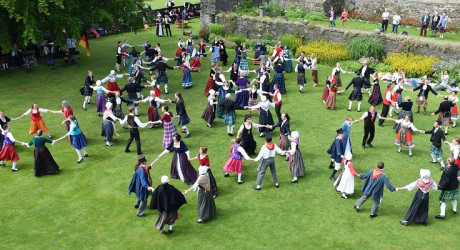 THIS month, there’s a great opportunity to celebrate our cultural links through Scottish, Estonian, French, Irish and Polish music and dance.

The occasion is the 25th Dunedin Dancers International Folk Dance Festival (recognised as the longest-running event of its kind), taking place 14-20 July, with indoor and outdoor performances in Edinburgh, Anstruther, Glasgow and Stirling.

The festival’s Gala Concert at the Church Hill Theatre in Edinburgh is one of the highlights, with folk dance and music performances from ‘Solvedaja’ – a folk dance ensemble from Tallinn, Estonia, and ‘Les Enfants du Morvan’, a dance group from Dijon, France.

Festival spokesperson, Fiona Campbell, said: “The gala concert and other performances will be fabulous opportunities to hear the different musical traditions and see the various different dance styles and costumes. And we are so pleased that we are able to take this experience from Edinburgh to Glasgow, Anstruther and Stirling.”

The festival Gala Concert takes place on Thursday 18 July. Tickets are £12/£10 concession/£7 children/£30 Family and available from the Usher Hall Box Office 0131 228 1155 or visit: www.usherhall.co.uk or www.eventbrite.com or at the door on the night. All the other festival performances are free.

They acknowledge the funding support from the Tasgadh Traditional Arts Small Grants scheme administered by Fèisean nan Gaidheal with funding from Creative Scotland. They also appreciate the assistance of the Edinburgh Academy Junior School helping provide the home base for the festival and The City of Edinburgh Council for supporting a civic reception to celebrate the 25th edition of the International Folk Dance Festival.

Monday 15 July: EDINBURGH The Royal Mile (near St Giles)* Scotland, Estonia and France will be on the pedestrian area 1.00-2.30pm – free

Scotland, Estonia and France, Ireland and Poland will dancing in this gala performance. Tickets are available from the Usher Hall in person at the Box Office – tel: 0131 228 1155 or online www.usherhall.co.uk with any remaining for sale at the door. £12 full price /£10 concession /£7 children up to the age of 18/£30 Family – either two adults two children or one adult and three children.

Friday 19 July: ANSTRUTHER, Fife* Scotland, Estonia and France will be dancing at the Anstruther Harbour Festival from 3-5pm – free

Saturday 20 July: STIRLING CASTLE Scotland, Estonia and France, Ireland and Poland in their last performance together in the stunning location of the Queen’s Garden at Stirling Castle 1.30-3.45pm. Not to be missed! (Historic Scotland admission is required £15/£12/£9)

For any further enquiries or photo requests please contact Fiona Campbell 0795 191 8366 or publicity@dunedindancers.org.uk

Dunedin Dancers was formed in 1970 to reciprocate the experiences New Scotland had had to perform in other countries with the opportunity to perform in a festival in Edinburgh.

The first biennial festival was held in 1971 and has continued since then, hosting two-to-three groups each time – with performances around Edinburgh and surrounding areas.

The two Scottish groups come together to perform Scottish Country Dance, Highland and Scottish stepdance (hard shoe), to music played primarily on the fiddle, accordion and bagpipes. For more information about all our activities, including this festival, phone 0795 191 8366 or visit our websites: www.dunedindancers.org.uk / www.newscotland.org.uk

Solvedaja The Folk Dance Group SOVELDAJA, based at the Tallinn University, was formed during the mid-1980s. Their repertoire includes folk dances, as well as new choreographed dances.

Since 2006, their instructor has been Helen Reimand, who has also created many of the dances in the group’s repertoire.

The group’s name SOVELDAJA is derived from the Estonian verb, soveldama, which means to create, to arrange, or to design. One of the first dance collectors and creators, Anna Raudkats, used to sign the dances she arranged by writing Soveldanud Anna Raudkats which was how the group got its name.

They practice their dancing skills during weekly rehearsals, as well as at camps, and the group has taken part in several international folklore festivals over the years. They also spend leisure time together: in pubs, at barbeques and just visiting each other – they are like a big family. New Scotland met Solvedaja last year in Germany at the Europaische Jugendwochen held at Ludwigstein Castle.  https://www.tlu.ee/en/soveldaja

The group’s founders were people from the Morvan who moved to work in nearby Dijon, capital of the Bourgogne. They have around 60 active members, who practice and promote the traditional dance, music, songs and costumes of their area.

Their dance repertoire contains lots of Bourrees, but also branles, polkas, scottishes, mazurkas and waltzes often dancing in sabots (wooden clogs). They only use traditional instruments: hurdy-gurdy, pipes, diatonic accordions and fiddles and singing is also important in their tradition.

Dunedin Dancers member and New Scotland Scottish Stepdance tutor, Fiona Campbell, met the group when dancing with Absolutely Legless at Folkmoot USA and put them forward as a suggestion to be invited to Edinburgh. http://enfantsdumorvan.fr/

Polish song and dance ensemble, Ojczyzna, had existed in Edinburgh for over 30 years – led by artistic director, Stefan Boron.

Under the same leader, it was set up again in May 2014 by the Polish Cultural Festival Association, as a part of the Polish Scottish Heritage Festival project, ‘Ceilidh with a Polish Twist’, as a pilot project to continue dancing in the spirit and tradition of the former Ojczyzna group.

During the early years of the Dunedin Festival, Dunedin Dancers had many contacts with Ojczyzna, and we are glad to pick up the thread and renew our friendship! www.facebook.com/polishdanceedinburgh

Absolutely Legless Absolutely Legless brings traditional Irish music, song and dance alive. The group was formed in Edinburgh in 1997 by experienced dancers and musicians and has developed a reputation for vibrant and innovative performances.

Drawing on the Irish hard and soft shoe traditions, their dances combine grace and rhythmic power to provide an exhilarating experience. The live band play new arrangements of traditional and original airs, songs, jigs and reels.

The dancers are a mix of experienced (including world champions) to new adult learners who combine to entertain audiences every time. Over the years, Absolutely Legless has performed around the UK, at numerous festivals throughout Europe (including France, Spain and Croatia) and in the USA and beyond. Recently, they travelled to Sharjah in the United Arab Emirates to take part in the Heritage Days festival – in conjunction with the Balbir Singh Dance Company – presenting a number of traditional and fusion pieces with the Indian dance troupe – appearing live on national TV there. https://www.absolutelylegless.co.uk