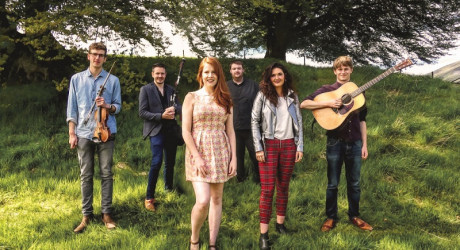 SOME of Scotland’s finest young folk musicians are set to visit their home areas and release an album after a performance at Celtic Connections earlier this year – thanks to the TMSA (Traditional Music & Song Association of Scotland).

Audiences are treated to a mix of new material written and composed by these outstanding young musicians as well as innovative arrangements of traditional tunes – supported by project musical director, Anna Massie – one of Scotland’s foremost guitarists, well known for her work with the likes of Blazin’ Fiddles.

Anna was a former winner of the BBC Young Traditional Musician of the Year Award back in 2003 and toured with the TMSA Young Trad Tour in 2015 as an accompanist.

“The release of their collaborative album and forthcoming tour is really exciting for the young musicians and I have no doubt the group will act as fantastic ambassadors for both the future of traditional music and the TMSA.”

The tour is supported by Creative Scotland. Kirsty MacDonald, Traditional Arts officer at Creative Scotland, said: “We are delighted to be supporting once again the TMSA Young Trad Tour and associated album. TMSA provides these young musicians of the highest calibre with the opportunity to tour in their local areas, and to create an album which helps raise their profile at this critical early stage of their music career.”

The album was recorded and mixed by Angus Lyon at Gran’s House studio in South Lanarkshire before being mastered at the renowned Castlesound Studios, Pencaitland, East Lothian.

Competition finalist, Ali Levack, playing whistles and pipes (Maryburgh), is not able to make the tour but does appear on the CD that has been recorded and will be available at the gigs and online.

Workshops are being organised at some of the locations listed above – see www.tmsa.org.uk for details.

For further information on the tour, or for accompanying images, please contact the TMSA Young Trad Tour’s project manager, Grant McFarlane, on 07595175099 or grantmcf@me.com.

Hannah joined the National Youth Choir of Scotland aged eight and honed her trad music style until beginning the Scottish Music course at the Royal Conservatoire of Scotland in 2012. Since graduating, she has toured internationally with Irish-American traditional group, Cherish The Ladies, appeared as a soloist on BBC Scotland’s Hogmanay Live 2014 and 2016 and performed a debut sell-out show at last year’s Edinburgh Fringe. She released her debut EP, Beginnings, in November 2016, with a debut album in 2018.

Ali became hooked on the pipes when a family friend began teaching him at the age of nine. At 14, he began his studies at the National Centre of Excellence for Traditional Music and spent the next four years working with some of the country’s best tutors while also gaining accolades in various competitions. In 2012, he began studying piping at the Royal Conservatoire of Scotland and became heavily involved in the Feis movement. Ali currently lives in Glasgow and has enjoyed working with artists including Dougie Maclean, Mischa Macpherson, Edwyn Collins and previous Young Trad winner Charlie Stewart.

Heavily influenced by pipe music and Gaelic song, Rory’s love of trad music was cemented playing at ceilidhs all over Scotland on both piano and accordion. Now studying Traditional Music at the Royal Conservatoire of Scotland, he is taught by James Ross and Mary McCarthy, two of the top pianists on the traditional music scene. He enjoys bringing elements of jazz and blues to his music. His playing experience includes being part of the Fort George Military Tattoo in 2015 and also playing with 20-piece regional ensemble ‘Snas’ as well as energetic modern trad outfit Trip.

Luc McNally is a guitarist and singer from Dipton, County Durham. His work has taken him all over the UK and to Belgium, Germany, the Netherlands, Sweden, Finland, Estonia and the Czech Republic. Having been introduced to traditional music by four years with Kathryn Tickell’s Folkestra Youth ensemble, he went on to study Scottish Music for two years at the Royal Conservatoire of Scotland. As well as teaching guitar and playing multiple Scottish/Irish music sessions around Glasgow, he plays with new rock/traditional band Dosca, with electronic/Celtic group Sketch, and in a songs and tunes duo with piper and whistle player Eddie Seaman and acoustic trio, Snuffbox. Having recorded his first EP in the summer of 2015, Luc has been working on a debut album featuring some of Scotland’s finest young musicians.

Amy, who also plays piano and violin, began singing lessons at 11 and never looked back. As a teenager, she toured America, Canada and Germany with the Strathspey Fiddlers and went on to gain her BMusEd Music Teaching Degree from the University of Aberdeen. She now works part-time as a high school music teacher in North Lanarkshire while studying for a Masters in Scottish Music at the Royal Conservatoire of Scotland.

David began playing pipes at the age of nine, went on to graduate from the Royal Conservatoire of Scotland with a first-class honours degree in Scottish Music in 2015 and now makes a living playing and teaching traditional music. He was taught by the late Donald MacPherson, whom many regard as the best piper of the 20thcentury, and counts him as one of his biggest influences. David has played at the highest level of competitive piping and has played in many top pipe bands over the years, including the Scottish Power pipe band, with whom he performed at one of the Celtic Connections opening concerts at Glasgow Royal Concert Hall. This year, David performed with his band ‘Farrland’ at Celtic Connections, and released an album in early 2018 with new band Assynt.

Charlie studied Jazz Bass and Traditional Fiddle at the Royal Conservatoire of Scotland. He won Young Traditional Musician of the Year in 2017, as well as a Danny Kyle award playing alongside Ross Miller, and has reached the semi-finals of the BBC Radio 2 Young Folk Awards in 2016 playing with harpist Becky Hill. Charlie can be found performing with the bands Dosca, Sketch and Snuffbox as well as other projects.