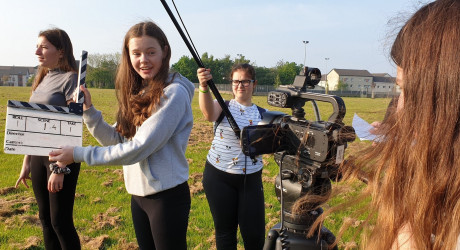 SEVEN projects across Scotland have been awarded a total of £600,000 funding through Screen Scotland’s Film Education Partnership Fund towards Film Education programmes.

Screen Scotland is working with a range of partners including Skills Development Scotland and the Scottish Funding Council to strengthen Scotland’s film education infrastructure and create a sustainable pathway for school leavers to build the skills and knowledge to pursue a career in the film and TV industry.

The Film Education Partnership Fund forms a part of Screen Scotland’s work to improve and extend the reach of film education to increase the number and diversity of young people seeking to enter the screen industries.

Fiona Hyslop, Cabinet Secretary for Culture, Tourism and External Affairs, said: “As film and television production activity continues to grow in Scotland, Scotland’s screen workforce must grow with it. Raising awareness among young people of the importance of the film and TV industry, both as a career opportunity and as a way of exploring their creativity is central to this work.

“Participating in creative subjects offers huge benefits to young people, helping to build confidence and raise attainment. I welcome the reach of these screen education projects and hope they will help to inspire the next generation of screen talent in Scotland.”

In the Western Isles, Western Isles Libraries will use their funding support towards Discovery Hebrides. The project will bring Dundee’s Discovery Film Festival (Oct/Nov 2018) to children and young people in the Outer Hebrides in 2019. The festival will incorporate film education to promote language learning and professional development for teachers, using film in the classroom along with public screenings of films for young audiences from around the world.

In Glasgow, the Articulate Cultural Trust has received an award to support the Training Unit Film Festival, a pilot project to develop a film festival for and by care-experienced young people. The festival will celebrate the creativity of young people from care by sharing their films and explore the fascination of the experience of care on film, inspired by the work of Lemn Sissay MBE and the Superman was a Foundling exhibition at The Foundling Museum in London.

Jaki McDougall, CEO of Glasgow Film, said: “We have been working with Into Film and Glasgow City Council for a number of years now – this funding is an exciting opportunity that will allow us to develop and extend our film education offer for more young people in Glasgow, by working collaboratively, more strategically and making better use of resources.”

Edinburgh-based Centre for the Moving Image (CMI) will use their funding award to deliver Understanding Cinema Plus. This project aims to develop an enhanced model of Understanding Cinema, their successful moving image education programme delivered in partnership with the Cinémathèque Française, and deliver quality film education in primary schools in three local authorities over the next academic year.

Yvonne Gordon, head of Education and Learning at CMI, said: “It’s fantastic that Screen Scotland share our ambition to embed film education within the school curriculum through supporting Understanding Cinema Plus. The project will be working with schools in Glasgow, Angus and Edinburgh, and we’re really looking forward to seeing how the teachers, the filmmakers and of course the pupils get on through the year, leading up to the showcase of their films at next year’s EIFF.”

Screen Education Edinburgh has received funding to support their Edinburgh City Film Education Programme which will deliver film education opportunities to teachers and pupils across the City of Edinburgh, in partnership with Into Film, Centre for Moving Image and City of Edinburgh Council. As part of the programme, the Our Edinburgh project is an opportunity for pupils to creatively portray Edinburgh their eyes, using film, whilst teachers will be developed in film understanding, making and literacy skills through an advanced CLPL programme, helping to embed film across the curriculum in the city.

Graham Fitzpatrick, from Screen Education Edinburgh, said: “We are delighted to have been awarded funding for the Edinburgh City Film Education Programme that will enable ourselves and our partners to work together strategically to embed film education across the curriculum in Edinburgh schools, building the skills and knowledge of teachers to confidently use film in the classroom, whilst supporting a diverse and inclusive range of pupils across primary, secondary and special schools in all localities of the city.

“We are also looking forward to building on five years of delivering the Moving Image Arts qualification here at SEE, working with our partners at Eden Court and Station House Media Unit to enable a growth of the course in Scotland. The MIA qualification has been successful in progressing young people aged 16 to 21 to study film at university and progress others into the film, TV and creative industries, with particular success in developing those coming from areas of deprivation, and those with previous negative experiences of education.”

Scott Donaldson, head of Film Education & Interim Director, Screen at Screen Scotland, said: “We are excited to support these long-term projects and the partnerships behind them, which have the potential to make strategic and sustainable impacts on the development of film education in Scotland. The projects cover a rich range of contexts and approaches, and we look forward very much to seeing them progress and grow.”