Media release: BBC Scotland’s sextet of A Play, A Pie and A Pint productions announced 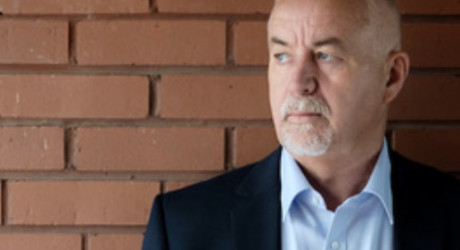 WRITERS – seasoned and new to TV – have signed up for BBC Scotland’s televisual treatment of the acclaimed theatre scheme, A Play A Pie and A Pint.

Pioneered in Glasgow’s West End, A Play A Pie and A Pint at the Òran Mór recently celebrated the staging of more than 500 plays.

Starting next month, the new BBC Scotland series will show six of the pub lunchtime plays, kicking off with Chic Murray: A Funny Place for a Window, written by Stuart Hepburn (pictured) and starring Dave Anderson, Maureen Carr and Brian James O’Sullivan.

The play is a poignant, but also comic look at the career of renowned comedian, Chic Murray, through his relationship with his wife, Maidie, who was, by far, a bigger star of the Scottish variety scene when they first met.

Dave Anderson’s portrayal of Chic – his comic timing and subtle portrayal of the Scottish legend’s failings – has been praised and the play is due to be shown at the Fringe in Edinburgh.

Writer and director, Stuart Hepburn, is a veteran in front of the cameras as an actor and behind the scenes as a writer, with credits spanning Taggart, River City, Katie Morag and Hamish Macbeth.

Numerous plays he has written include Oscar Slater – The Trial That Shamed a City and The Beaches of St Valery as well as films, The James Gang and A Love Divided. He lectures in screenwriting at Stirling University.

He said: “I am delighted to be involved with this project. Theatre audiences have loved Chic Murray: A Funny Place for a Window and I think it has the potential to be extended and shown for a longer run in bigger theatre outlets, but theatre is ephemeral, so I think it is terrific that it will be ‘immortalised’, as it were, with this recording for BBC Scotland.

“And that people sitting in their own homes across the country will get to see it and enjoy it.  I’m also delighted by the way that it has been produced. It has remained true to its theatre roots but it looks good and has been produced in a fresh contemporary way which will also work for television audiences.”

Other plays lined up for transmission on BBC Scotland include:

* Toy Plastic Chicken, starring Neshla Caplan, David James Kirkwood and Anna Russell-Martin. In the play, a toy plastic chicken going through airport checks is suspected of being a bomb, leading to the interrogation and screening of its female owner for domestic radicalisation. Writer, Uma Nada-Rajah, based her blackly comedic exploration of degradation and revolt on a real experience.

As well as her work as a playwright, she also works as a nurse. Based in Kirknewton, she trained with the acclaimed French theatre school, École Philippe Gaulier, is a graduate of the Young Writers’ Program at the Royal Court Theatre and a recipient of a New Playwrights’ Award from Playwrights’ Studio Scotland. Her other plays include The Constant K Determines the Ultimate Fate of the Universe and The Dubai Papers. Toy Plastic Chicken will be her first work to be showcased on television.

* A Respectable Widow Takes to Vulgarity, starring Anne Kidd and Craig McLean. This play depicts a recently widowed elderly lady, who strikes up an unlikely friendship with a young lad at her husband’s company, and goes on a mission to learn how to give verbal vent to her repressed emotions.

It has been written by seasoned playwright, Douglas Maxwell. His many plays include Yer Granny, Fever Dream: Southside, and Mancub and have been staged internationally from New York to South Korea, from New Zealand to Hong Kong. A Respectable Widow Takes to Vulgarity will be his work in recent times to have been shown on television.

* Meat Market, starring Julie Duncanson, Robin Laing and Megan Shandley. A comic tale, fraught with duplicity and dodgy ethics, that sees three strangers meet in a 24-hour gym late at night to negotiate the sale of a human kidney.

Meat Market was the first theatre play penned for writer, Chris Grady, who cut his teeth writing for comedy sketches. He is the co-creator and co-writer of BBC Radio Scotland’s Saddled. Chris is also a story producer on Scot Squad and regularly writes for River City Other writing credits include projects with Greg McHugh : Gary; Tank Commander, the Election Special and Gary Goes to Hollywood.

* Ring Road, starring Anita Vettesse and Gavin Jon Wright. Ring Road is a play about forty year old Lisa, who in thrall to a mid-life crisis, makes an indecent proposal to her brother in-law, to father a baby for her and end her childlessness. Actress Anita Vettesse, who appeared in Bob Servant, has been forging a career as a noted writer in recent years, including work for River City as well as Falling for BBC Radio Drama, and an episode of The Break for BBC Three. Her other plays have included Happy Hour, From the Air, and Eddie and the Slumber Sistersand she has recently become writer in residence at the National Theatre in Scotland. Ring Road will be her first original work to be showcased on television.

The latest project to be signed up as part of the sextet of plays for BBC Scotland is Crocodile Rock, a new musical by Andy McGregor. Set in Millport in 1997, it is a comic and musical coming of age story about 17-year-old Steven. Feeling hemmed in by island life, he meets an outrageous drag queen who opens his eyes to another world. It features actor Darren Brownlie and musicians Gavin Whitworth and Gary Cameron.

Director, composer and playwright, Andy McGregor, originally started off in a band Blind Pew, and in a parallel career also co-founded youth theatre groups in his home town of Largs and Greenock. He went onto train at the Royal Conservatoire of Scotland. Shows he has written, composed and directed include Spuds, The Rise and Inevitable Fall of Lucas Petit, Pure Freezin’, Love 2.0 and Vinyl Idol (with Debbie Hannan). Andy’s first project to be televised, Crocodile Rock will be recorded for its BBC Scotland screening during the theatre run in late August.

Each play, which are being produced for television by BBC Studios Comedy, will last roughly one hour and are due to start transmitting on the BBC Scotland channel in early September.

Gavin Smith, commissioning executive at BBC Scotland, said: “These six plays are a terrific showcase of contemporary play writing in Scotland and a celebration of our vibrant theatre scene. Our hope is this airing of some of the titles from A Play, A Pie, and A Pint will bring in a wider television audience to see and enjoy these fantastic plays, reflecting a theatre experience to viewers across Scotland.

“All six plays will give audiences a really good laugh as well as touching on challenging themes including grief, childlessness and racism that we hope will get audiences thinking as well.”