Media release: Crivvens! Oor Wullie sculptures have been visited over one million times 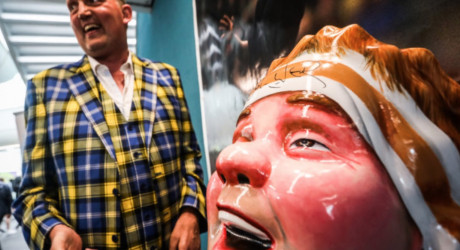 OOR Wullie sculptures on Oor Wullie’s BIG Bucket Trail have been visited over one million times by sculpture hunters since the trail began at the end of June.

The trail app, which has been downloaded over 40,000 times by Wullie fans, lets users digitally collect sculptures, with some great prizes up for grabs for app users too.

As Oor Wullie’s BIG Bucket Trail reaches the end, with only three weeks to go before the sculptures come off the streets, there have been some fantastic milestones and stories that have come from avid Wullie fans enjoying the trail.

Such as the amazing ‘Oor Simpson’ family, who are travelling the length of the country to visit all 200 large sculptures and support Glasgow Children’s Hospital Charity. So far, they have raised almost £700, covering in excess of 2,000 miles in the process.

Fundraising superstar, Tom Gilzean, the 99 year-old Edinburgh hero who has worked tirelessly for over 20 years to raise money for Edinburgh Children’s Hospital Charity, has been recognised with his very own sculpture.

The Oor Wullie, which proudly sits on Princess Street pays tribute to Tom, even donning his famous tartan trousers, service medals and tam o’ shanter. Last year, Tom donated £30,000 to the Edinburgh Children’s Hospital Charity, which went towards funding the Surgical Day Case waiting area and a discharge lounge for children and their families.

Doddie said: “The trail is an amazing concept. It’s a great honour to be involved in something like this.”

Famous faces have been enjoying the sculptures too, with stars such as Lewis Capaldi, The Proclaimers and Ian Rankin visiting Oor Wullie’s across Scotland.

* winter 2018 – Artists from across the country individually design each sculpture;

* spring 2019 – Schools in Scotland invited to take part in trail and receive a wee Oor Wullie sculpture to decorate;

* June – September 2019 – All decorated sculptures installed across the country for everyone to discover and enjoy throughout summer 2019: and

* The trail is an historic event – it’s believed to be the first time that an entire country has held a public art trail, having previously been held only in single cities at a time;

* Oor Wullie is an icon, who emotes nostalgia and affection – this well-loved comic character was voted ‘Scotland’s Favourite Son’;

* All 200 sculptures are sponsored by some of Scotland’s most respected and well-known companies – in addition, the headline sponsor for this event is Arnold Clark, national sponsors include: Citlylink, Scottish Power, Malcolm Group, Scotrail, Avian, Leith Agency and national partners include: VisitScotland, Active Scotland, Police Scotland, and Deposit and Return Scheme;

* The trail has an education programme – which will include tens of thousands of Scottish schoolchildren in the event;

* The trail is free to participate in – a downloadable free app as well as paper versions of the map, will allow families to take part in finding the sculptures, without having to pay. Few events are so accessible for families;

The trail encourages the public to engage with art and promotes positive messages relating to health and wellbeing – working with our partner Active Scotland we will develop a pedometer for the app and activities to enjoy the trail while walking, running or doing start jumps; and

* The trail will end with the auction of all 200 sculptures – potentially raising transformational sums of money for every baby, child and young person in hospital in Scotland.