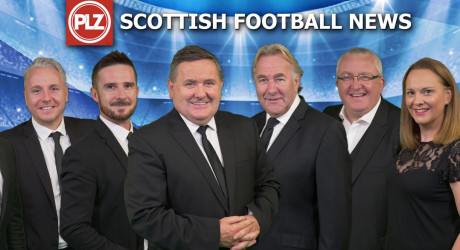 TWO of Scotland’s favourite football pundits, Tam Cowan and Tam McManus, have joined Peter Martin, Alan Rough and Barry Ferguson at PLZ to make up the new team for the ever popular ‘Football Show’.

It’s part of a wider development at PLZ to create one of the best editorial teams in Scottish sport.

Peter Martin said: “Tam Cowan and I have worked together many times before, mainly at live events, so I know he’s capable of handing out a right good slagging.

“I’ll be keeping my guard up for the first few weeks and watching for the verbal sucker punches coming across the desk.

“He’s already had a go at our studio set saying he thought it was lovely that Taylor Ferguson had donated his old salon chairs to us. That’s the joy of working with Tam – you don’t know what’s coming next.”

On the wider developments at PLZ, Peter added: “It’s brilliant to see so many top faces joining PLZ.

“I know both the Tams well and they’re extremely good at what they do – great laughs but still widely respected for their knowledge of the game.

“Hugh MacDonald and Alison McConnell are two of my favourite football writers, so it’s a real pleasure to work with journalists of that quality.

“When you add those people to the regular team of Barry Ferguson, Gabriel Antoniazzi and, of course, Roughie, it really is one of the strongest teams I’ve worked with in my career.”

PLZ is one of Scotland’s most innovative media companies with its ‘platform agnostic’ strategy meaning its content sits on all platforms including social, websites, apps and traditional TV. The strategy is to deliver the programmes to the viewer where they want it, when they want it.

Peter said: “It was once the case that editorial teams were tied to the local newspaper, radio or telly station to cover Scottish football. That’s not the case anymore. We have a fantastic team in front of and behind the camera who really understand that the future of media is taking great stories directly to the audience. We’ve had a great deal of success with this already but are now relishing the challenge of developing further.”

MEDIA RELEASE issued by PLZ. You too can share your stories (aka press or media releases), on this site. Email here for more information.