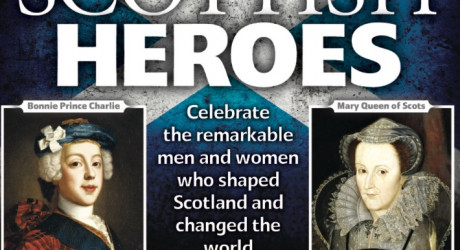 SCOTTISH Heroes is the brand-new book from The Scots Magazine, which celebrates the remarkable men and women who have shaped Scotland.

The book is packed with fascinating facts about more than 25 Scottish heroes from across the centuries.

From royal visionaries and rebellious leaders, sports stars and literary greats, to pioneering inventors, this 144-page publication focuses on Scots who have made their mark on world history.

There is so much to discover in Scottish Heroes. In Royals and Rulers, find out more about the ‘Warrior King’, Robert the Bruce, and his battle to free Scotland. Sporting legends such as Sir Andy Murray and Old Tom Morris are honoured and scientific minds like Sir Alexander Fleming and Professor Sue Black are examined.

And there’s a host of lesser-known Scots recognised in the book, all deserving of the title, ‘hero’, including the likes of Sir Alexander Glen, whose adventurous life is said to be the inspiration behind James Bond.

Robert Wight, editor-in-chief of The Scots Magazine, said: “Over many centuries, Scotland has produced a remarkable number of great men and woman whose lives have had a truly global impact – it’s out of all proportion for a country so small in size. It seems we’ve always punched well above our weight.

“Scottish Heroes was edited by Katrina Patrick. She and her team had a tough task selecting just who to include in the book. There are Scots everyone would expect to find in a publication of that title – like Bruce and Wallace – but there are also plenty who will come as a surprise… and a few controversial choices too. It certainly caused a lot of debate in our office.”

The Scots Magazine is an award-winning magazine from DC Thomson Media. First printed in 1739, it’s recognised as the oldest publication in the world still in production. It’s the best-selling Scottish-interest title and celebrates the very best of Scotland, from the vibrant cities, to the great outdoors, history, nature and culture – all complemented by stunning photography.

Scottish Heroes is on sale now priced at £9.99 and is available to buy online.