Media release: The Papers – The BBC goes behind the scenes in the newsroom of The Herald, The National and Evening Times 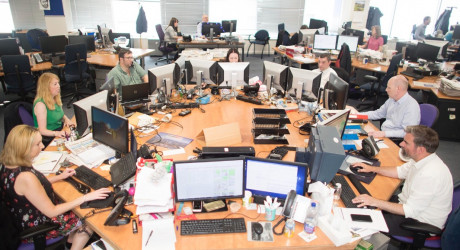 READERS of some of Scotland’s best-loved newspapers will have an opportunity to see them as they never have before – after editors gave BBC cameras unique access to film behind the scenes in their newsrooms for six months.

On Wednesday September 18 at 9pm, BBC One Scotland will broadcast The Papers, a two-part series which tells the inside story of the shared newsroom of The Herald, The National and Evening Times.

Shot and produced by the award-winning filmmaker, Sarah Howitt, the cameras follow editors, reporters and photographers as they battle to cover the biggest story of our generation: Brexit.

As well as showcasing the juggling demands of keeping up with the rolling news agenda in both print and online, the fly-on-the-wall documentary has in-depth interviews with staff and editors of each title as they battle to succeed in a fiercely competitive market.

The successful launches of the Herald on Sunday and the Sunday National, as well as the digital transformation of the newsroom, are captured on screen.

Donald Martin, editor of The Herald, said: “We have a team of brilliant journalists working tremendously hard to provide quality content across all our titles, in print and online. Much of that great work goes unseen and this was a fantastic opportunity to provide a rare insight for our existing readership and, hopefully, engage with a potential new audience.

“I’m extremely proud of our editorial team and anyone watching will see why – they are eloquent, passionate, caring, professional and with a tremendous pride in what they do.”

The documentary also showcases the incredible success of Scotland’s two youngest papers, The National and the Sunday National – both founded after the referendum of 2014.

Pro-independence title, The National, is currently the best-performing newspaper in Newsquest, both in print and in digital. The paper’s circulation is up 11 per cent so far in 2019 versus last year, and its website traffic is the fastest-growing in the company – 45 per cent up on 2018.

Its innovative ‘10,000 Steps’ campaign has also pledged to invest directly in journalism for every 1,000 subscribers that sign up to support the paper.

Callum Baird, editor of The National, said: “In a crowded newspaper market, it’s clear that readers want a newspaper which fights their corner – and stands up for Scotland’s right to reject Brexit and choose a different path.

“Half of Scots believe Scotland should be an independent country, and we believe it’s very important that that position is reflected every morning in at least one newspaper.

“Although we do record podcasts, shoot videos, and publish liveblogs, the phenomenal success of The National proves that titles can also have a strong future in print if you put innovation at the heart of your newsroom.”

Richard Walker, editor of The Sunday National, added: “The National has been a great success story since it launched in 2014. As support for independence gains unstoppable momentum it has been a great experiencing launching the Sunday.

“The documentary gives a fascinating glimpse behind the scenes of The Herald and The National titles at a crucial time for Scotland and its journalism and underlines the need for a diverse and healthy indigenous media as we prepare to take the decision about our country’s future.”

For more information on any of our print and online brands within the Newsquest Scotland portfolio, please contact head of Marketing, Danielle Camillo, on danielle.camillo@newsquest.co.uk