Media release: New albums recorded at studio on the ‘edge of the world’ 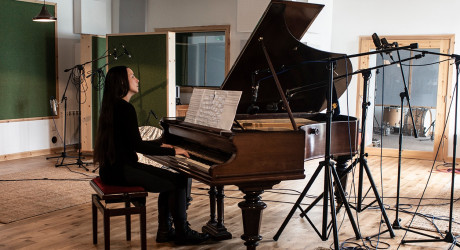 AWARD-winning performer and composer, Jessica Danz, has launched two new albums – Islands of the North and Silence. They were the first albums to be recorded at Black Bay Studios on the island of Great Bernera,  off the north-west coast of Lewis in the Outer Hebrides, making it one of Europe’s most remote recording studios.

Both albums are being released while Danz is seven months pregnant with her first child.

Written for solo piano, Islands of the North began life as a silent film score – in 2017 Jessica worked with An Lanntair arts centre and the National Film Archive of Iceland to create a live piano score for a showing of Loftur Guðmundsson’s 1925 landmark Icelandic documentary, Ísland í lifandi myndum.

Depicting scenes of farming, fishing and city life, through to the spectacular waterfalls and dramatic oceans of Iceland, the film shows the strong relationship between Scandinavia and the Outer Hebrides.

Jessica revised the score in 2018 to create a full length solo piano suite for the album: recorded on a beautiful 1930s Bechstein piano, it harks back to the sound world of the silent film era.

As well as being inspired by Guðmundsson’s fascinating film, the music is strongly influenced by Jessica’s travels to the northern islands of Scotland and the Faroe Islands, and her experience of living in the Outer Hebrides; places where the sea and the weather are ever-present, powerful forces.

Her second album, Silence, combines evocative vocals, the rich sound of a grand piano, and orchestral violin textures. Written between Scotland and Australia, it navigates a journey out of creative silence and across the world, exploring endings and beginnings, loss and change.

Featuring seven original songs, as well as an interpretation of the traditional folk song, Black is the Colour, all music is performed by Danz on voice, violin and piano. The album ranges in mood from the contemplative opening track Falling to the dark melancholy of Last Waltz, culminating in the rhythmic drive and sweeping interludes of Silence.

Both albums are available now exclusively on Jessicadanz.com or from Bandcamp as digital releases.

Jessica Danz is an award-winning performer and composer living and working in Scotland. Weaving a haunting voice over the sounds of piano and violin, she is a maker of finely-crafted songs, as well as writing ensemble works and live scores for theatre, dance and silent film.

Forging her own highly-individual creative path, she has emerged from her classical roots to work across many artistic genres, including folk and world music, improvisation, theatre, and visual art. A versatile and highly-skilled performer, she brings together contemporary classical and folk-noir elements in an experimental, virtuosic style.

Moving to the Outer Hebrides in 2017, she was commissioned by An Lanntair’s Faclan Festival to create a live piano score for the early Icelandic film Ísland í Lifandi Myndum. The work was then installed as part of the 2018 exhibition SSA & VAS TOGETHER at the Royal Scottish Academy.

In 2018, she was awarded one of Creative Scotland’s Muriel Spark 100 grants to write a new work for string quintet, which she premiered with the Brodick Quartet at the Scottish Poetry library, and in early 2019 released her new solo album Under the World.

“Navigating a journey out of creative silence and across the world, these albums explore endings and beginnings, loss and change, as I moved from Australia to Scotland and began to forge a new creative identity. The two years I spent living and working in the Outer Hebrides were an immensely valuable time for creative introspection and exploration, and experiencing life on these northern islands was a powerful beginning to a new era of my life on the other side of the world.”