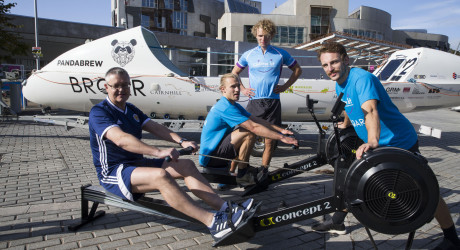 Before entering parliament to challenge the MSPs, brothers Jamie, Ewan and Lachlan MacLean, known as Team BROAR (Brother Oar), had already rowed for 23 hours through the night in a non-stop relay outside Edinburgh’s Dynamic Earth.

Jamie, Ewan and Lachlan were joined by a team of politicians led by Stuart McMillan MSP, including the Minister for Children and Young People, Maree Todd, and children from Forth View Primary school in Edinburgh, for a Beat BROAR challenge in the final hour of their relay, which took place inside the Scottish Parliament.

Children’s Minister, Maree Todd, said: “I wish Ewan, Lachlan and Jamie the very best of luck with the Talisker Whisky Atlantic Challenge, and their inspiring attempts to raise money for Children 1st’s Parentline. By offering a trained, experienced and sympathetic ear, Parentline offers vital support and information to anyone caring for or concerned about a child.”

The brothers are preparing to row 3,000 miles across the ocean this December in the Talisker Whisky Atlantic Challenge, known as the world’s toughest row, to raise £250,000 for Children 1st and Feedback Madagascar. On completion of the row, the brothers, who grew up in Edinburgh, will – it is believed – become the first brothers and the youngest team ever to complete the row.

Team BROAR are now inviting sports clubs, businesses and schools across Scotland to take on the Beat BROAR challenge for Children 1st by encouraging teams to row a sponsored 50 miles or more to match or beat the number of miles the brothers will have to row each day to cross the Atlantic.

Ewan Maclean, the eldest of the BROAR team, said: “We are delighted to have been able to complete a 24-hour row in the heart of Edinburgh, before setting off for the wilds of the Atlantic. It was brilliant to have entered the Scottish Parliament during our final hour and to team up with Children 1st against the MSPs.

“We’re really hoping that our story will raise awareness of the Beat BROAR challenge and inspire lots of teams, of all ages, to get involved to support children and families across Scotland.”

Stuart McMillan MSP, who co-ordinated the MSP team which competed against the brothers, said: “I was delighted to welcome the brothers into parliament today to raise awareness of their fundraising efforts. To undertake such a massive challenge is truly inspiring and I wish them all well for their row across the Atlantic. Thanks to everyone also at Children 1st for their efforts in helping arrange today’s event. The charity does great things for young people across Scotland and the money raised from this rowing challenge will help support their work going forward.”

Susan Bradley, Children 1st head of Public Fundraising, said: “It’s been brilliant to see MSPs getting involved in the Beat BROAR challenge. We’re so grateful that Ewan, Jamie and Lachlan have chosen to support other families by raising money for Children 1st’s Parentline service. Many families tell us that Parentline is a lifeline – by signing up to the Beat BROAR challenge, teams across Scotland can help children and families to get the support they need, when they need it.”