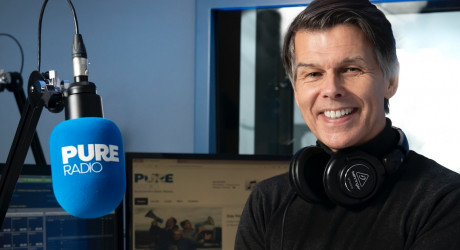 SCOTTISH radio is about to experience a breath of fresh air, with the launch of an exciting new station – Pure Radio.

Pure Radio will broadcast in high-quality DAB Radio and be available to nearly three million adults across Central Scotland. Listeners can also tune in on the app, at pureradioscotland.com, and ask their smart speaker to “Play Pure Radio Scotland”.

Pure Radio will officially burst onto the airwaves on Wednesday 27th November at 8.00am.

Led by the legendary Robin Galloway (pictured), who heads up the breakfast show, the station’s remit is to bring back the spirit of local radio to the nation and reverse the trend of networked radio shows.

Where Pure Radio will differ from the competition is that there will be no hourly news bulletins and less adverts interrupting the shows. Pure Radio will only talk about news if they know it is of interest to their listeners. At Pure Radio, No News Is Good News.

Fun, cheeky and irreverent – that’s the tone that Galloway was famous for and that’s exactly what to expect from this new station on the airwaves and it’s not just going to come from the veteran DJ, with Lynne Hoggan and Paul Harper following him in the same style each day.

It’s a station by Scots, for Scots. The heavy emphasis on music will see major airplay for everyone from Gerry Cinnamon and Lewis Capaldi to Simple Minds, Eurythmics and Deacon Blue. Scottish artists, in other words.

As well as presenting the Robin Galloway Breakfast Show every weekday morning from 6am -10am, Galloway is also Pure Radio’s boss and he couldn’t be more excited to get back to doing what he does best.

He said: “DC Thomson Media assured me they wouldn’t interfere with my show. So I said, okay – prove it – make me the boss. So they did! The fools. Radio in Scotland needs open heart surgery or in the next few years, it’ll be given its last rights. I’m going to resuscitate it and bring it back to life.

“Remember when radio used to be fun? It was risky, edgy, flew by the seat of its pants and surprised its listeners. When was the last time you heard something that made you utter the phrase, ‘Did they actually just say that….?’ You didn’t. Because it didn’t happen. It will on Pure Radio.”

MEDIA RELEASE issued by Beattie Communications. You too can share your stories (aka press or media releases), on this site. Email here for more information.