Media release: Introducing The Year of Scotland in Australia 2020 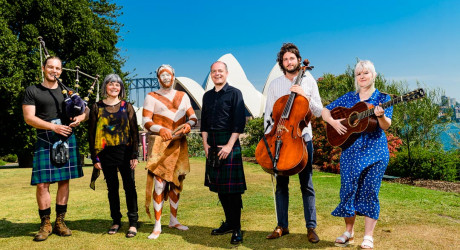 Over 150 performances between January and March 2020 by Scotland’s finest Traditional, Gaelic and Celtic musicians at over 70 Australian festivals and venues, in more than 60 towns and cities, nationwide

With many more to be announced in the new year

FROM a packed launch event at Sydney Opera House today, attended by Australia’s music festival directors and promoters, Creative Scotland’s head of Music, Alan Morrison, joined Amanda Jackes of Australia’s legendary Woodfordia festival, to announce the first details of what is set to be the largest showcase of traditional Scottish music and heritage in Australia, ever.

Taking place over 12 months from December 31st 2019 until and including December 31st 2020, hundreds of performances of Scotland’s finest Traditional, Gaelic and Celtic musicians will take the stage. In just the first three months, between January and March, there are 150 performances at over 70 festivals and venues in more than 60 towns and cities.

With many more to be announced in the New Year, the fast-expanding programme already features the world-renowned Capercaillie, alongside Elephant Sessions and multi-award winning Breabach, as well as Moishe’s Bagel, Rura, The Langanband, The Jellymans Daughter, and rising stars such as Brìghde Chaimbeul, Fara, and Siobhan Miller.

Many of the acts have strong roots in their cultural heritage whilst also drawing upon other musical genres, be it rock, jazz, classical or pop.

This diversity in music will showcase the vibrancy of Scotland’s living tradition – contemporary, confident and hugely appealing to audiences at home and abroad.

From The Glenturret Burns Night Supper on January 25, during which Scottish tradition will meet Australian Indigenous culture at Sydney’s Opera House, and a 27-date Scottish Towns and Grand Houses circuit across the country in conjunction with the National Trust, through to the Brigadoon Highland Games, a local version of the Edinburgh Fringe Festival and the Woodford Folk Festival Hogmanay on 31 December, The Year of Scotland in Australia will bring a breadth of Scottish culture and heritage to Australian audiences.

The Year also aims to highlight the ongoing work of Australian-based organisations who maintain Scottish tradition and culture through the presentation of their own Burns Nights, games, ceilidhs, clan gatherings and festivals, annually.

Produced and curated by Showcase Scotland Expo and Woodfordia Inc in partnership with Australia’s festivals and event organisers, The Year of Scotland in Australia 2020 is backed by Creative Scotland, VisitScotland, The Scottish Government and The Glenturret whisky.

Fiona Hyslop, Scotland’s Cabinet Secretary for Culture, Tourism and External Affairs, said: “The Year of Scotland in Australia is a phenomenal opportunity to further Scotland’s enduring relationship with Australia, with musicians from both sides of the globe sharing our dynamic traditional music scene.

“With this shared investment, festival visitors will be introduced to our music, heritage and culture. My hope is that new working partnerships will be forged, creating demand for continued Scottish performances beyond next year, and encouraging our friends Down Under to come to Scotland and experience all we have to offer.”

Woodfordia Inc.’s general manager, Amanda Jackes, said: “We’re very proud to be a part of the Australian folk scene, which we believe is a really broad and welcoming scene. Collaborating to present Australian audiences with the calibre of artists we’ll have visit during the Year of Scotland In Australia, not to mention the increased focus on Australian-based artists from the Scottish diaspora, is a rare opportunity, and we’re honoured to be playing a role in the Year.

“It’s also a wonderful chance to look into what’s already happening in Australia – there are so many bands, clans, community groups and organisations keeping Scottish tradition alive and helping to move it forward. In creating new projects, such as the Scottish Towns and Grand Houses Tour, or the curation of several Festivals of Small Halls tours featuring Scottish artists, we’ve found that almost everyone has some connection to Scotland – and if they don’t, they will after 2020.”

Creative Scotland’s head of Music, Alan Morrison, said: “Scotland’s folk and trad music is some of the best in the world, and we’re delighted to have an unprecedented opportunity to share it with our friends in Australia.

“This year-long celebration of Scottish heritage will resonate with Australian audiences whose family roots go deep into Scottish soil but also with anyone who simply enjoys good music played brilliantly by world-class artists.

“The buzz of excitement surrounding our folk and trad scene has been growing louder in recent years, as our most cherished tradition bearers rub shoulders with the next generation of breathtaking talent. The music they make is steeped in the past but drives head-on into the 21st century, reaching new fans at home and abroad, and bringing our cultures closer together.”

Malcolm Roughead, chief executive of VisitScotland, said: “Australians have a close affinity to Scotland and its reflected in the huge and increasing numbers who travel to our shores each year. The Year of Scotland in Australia is a fantastic way for our friends here to sample Scotland’s vibrant arts, music and cultural scene and maybe provide that spark of inspiration for those yet to visit and experience it for themselves.

“More than 119,000 Australian residents were born in Scotland, while over two million claim Scottish ancestry, underlining the genuine shared heritage between our two nations. This programme of events will showcase some of the best of Scottish talent and is an ideal way to celebrate that strong and long-standing bond.”

The Australian Scottish diaspora, over two million of whom claim Scottish ancestry, are also running events, many of which are regular meetings and celebrations. Over 36 community groups are running multiple events and over 200 are presenting Scottish themed concerts.

Three flagship events designed to celebrate Scottish culture are taking place in the first part of 2020 with support from The Glenturret Distillery:

Showcase Scotland Expo is dedicated to opening new markets for the presentation of artists working in the genres of folk, Gaelic and Scots language, traditional, world, acoustic and roots music. Through the work presented, they seek to strengthen professional networks, promote the outstanding quality of traditional and folk music produced in Scotland and encourage international bookings for Scottish musicians across Australia in 2020 and beyond.

The mission statement of Woodfordia Inc. is to stimulate, facilitate and foster the preservation and promotion of folk culture for the common good. It does this primarily through the annual Woodford Folk Festival, The Planting Festival, and the Festival of Small Halls, Australia.

Creative Scotland is the public body that supports the arts, screen and creative industries across all parts of Scotland on behalf of everyone who lives, works or visits here. We enable people and organisations to work in and experience the arts, screen and creative industries in Scotland by helping others to develop great ideas and bring them to life. We distribute funding provided by the Scottish Government and the National Lottery. Follow us @creative scots and www.facebook.com/CreativeScotland

In April 2018 VisitScotland launched a brand-new global campaign, Scotland is Now. To find out more, go to www.scotlandisnow.com or join the conversation by using #ScotlandIsNow VisitScotland’s Community site was set up for the Scottish public to help, engage and enthuse potential visitors about the country. To get involved, go to: www.visitscotland.com/community.

Scotland is a bold and creative country, rich in history and heritage but forging forward in a way that is progressive, pioneering and inclusive. A country that is challenging new thinking, inviting new investment, creating new opportunities and supporting new industries, Scotland is driving technological advances that embrace humanity across the world.

We pride ourselves on being one of the most open countries in the world with a strong desire to be good global citizens, contributing to world issues. Our door is always open, and we put forward a positive voice, opening our arms to new people to build a strong economy and culture. The Scottish Government works in partnership with our national agencies to deliver an unified global brand marketing campaign ‘Scotland is Now’ which aims to promote and celebrate our culture, our values, our innovations and economic strengths to continue to attract people to come live, work, visit, study, invest and do business in Scotland, right now.

Located in the spectacular Strathearn countryside, The Glenturret Distillery in Crieff is considered the oldest working distillery in Scotland and five-star visitor attraction that offers a truly unique and authentic experience to guests from all over the world.

Continuing the tradition of making whisky by hand and by heart, the distillery offers visitors, from novices to whisky enthusiasts, an unique opportunity to experience the traditional handmade distilling processes that have been used to craft the whiskies at Glenturret Distillery for generations. www.theglenturret.com