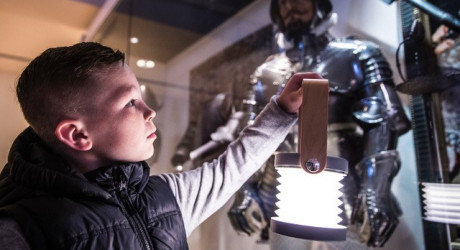 A BESTSELLING children’s book, a new Gaelic language children’s TV drama series and a documentary about the climate crisis uniting communities in the Scottish Hebrides and Greenland are among a diverse mix of new content commissions announced by independent Scottish production companies through Screen Scotland’s Broadcast Content Fund.

Firecrest Films (Supershoppers, Murder Case, Secrets of Amazon, Inside the Murder Trial) have received a commission from BBC Scotland to produce Night at the Museum (working title), a four-part factual entertainment format series which gives children the opportunity to explore some of the UK’s most remarkable educational spaces after closing time.

With free rein to roam unsupervised, where will their inquisitive minds lead them? Watching on from afar via a video link are the museum’s curators. The series is aimed at family viewing.

Locations include the National Museum in Edinburgh, the Royal Armouries Museum in Leeds, the Manchester Museum of Science and Industry and the National Maritime Museum in Greenwich. The series will be distributed internationally by Banijay Rights.

The Tom Gates series (published by Scholastic) is available in 45 languages and currently has 17 books with more coming in 2020. The series, led by Arabella Page-Croft of Black Camel Pictures and Ken Anderson of Red Kite Animation, will be adapted by Ben Ward (Horrible Histories, Danger Mouse, M.I. High) and co-developed by Sky Kids.

Arabella Page-Croft, of T G Entertainment, said: “We are delighted by Screen Scotland’s commitment to our exciting new children’s venture and thrilled to be developing this TV series from Liz Pichon’s remarkable series. We are looking forward to collaborating with her on this live action and animated adventure.”

Ken Anderson, of T G Entertainment, said: “Tom Gates is a world-wide bestselling property- published by Scholastic – and is an amazing opportunity for Scotland. We are delighted to be working together with Screen Scotland and our broadcast partner, Sky, on this brilliantly unique series; combining animation and live action.”

Independent production company, Sorbier Productions, run by Patsi Mackenzie, is in development for ÒSDAIREAN ÒGA/ Little Inn Keepers (working title), a Gaelic language live action children’s drama following a brother and sister duo who live in a small, rundown Scottish island hotel. The series will follow their lives in the hotel and the guests who call there, along the way. Aimed at 6-12 year-olds, the development of the series is supported by BBC ALBA.

UistFilm Ltd, based at Taigh Chearsabhagh in Lochmaddy, North Uist, have received early stage development support for Message from Upernavik. The TV documentary explores a message in a bottle sent from a hunter in Northwest Greenland in 2004 and found in Uist in 2006. This film is about extreme climate change and resilient islanders on two continents fighting to adapt. The documentary directed by Andy Mackinnon of UistFilm and co-produced by John Archer of Hopscotch Films will be completed in late 2020.

“These latest awards demonstrate the creativity and vibrancy of the industry in Scotland, and will help to bring diverse, cutting edge stories to screens across the country, for people of all ages to enjoy.

“We have seen some fantastic screen productions come out of Scotland in the last year, and I look forward to seeing more great television being made possible by this enhanced funding.”

Isabel Davis, executive director at Screen Scotland, said: “These great projects from Scotland’s TV talent highlight the confidence from network commissioners in Scottish production companies. There is huge demand for content across all genres and these commissions are reflective of this, it is incredibly encouraging to see new entertainment and children’s drama formats with real returnable potential being made in Scotland.”

Other recent awards made through this fund, include those made to Scotch Limited in Stornoway who have received funding to support a slate of unscripted documentary ideas and Glasgow’s Two Rivers Media who will use their slate funding to support the development of new entertainment formats.

Donald Coutts, of Scotch Limited, said: “Having this support has enabled our small creative company to tread water, sniff the wind and get our act together to get ideas onto paper and go and face the Commissioners with a smile. Having this money has allowed us to stop having to constantly work and   create some important developing time.”

The Broadcast Content Fund is a rolling £3million fund, accepting applications for all genres of broadcast content including factual and scripted programming. The fund is central to Screen Scotland’s plan to increase the number and diversity of film and television productions from Scotland and build sustainability in the sector.