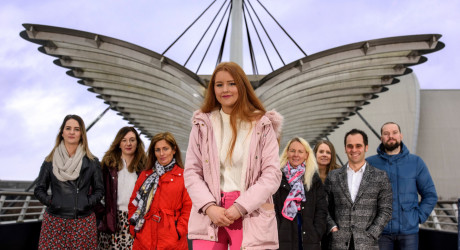 The findings show the striking impact and statistical significance of MCR mentoring, including an average 25.3 percentage point increase in the number of care-experienced young people progressing to university, college or a job. The highest difference recorded was an extraordinary 35.3 percentage points improvement.

Critically, the attainment gap was closed on the measure of those achieving one or more qualifications at National 5, showing a peak 30.4 percentage point improvement and an average 21 percentage point improvement, from 66.8 per cent to 87.8 per cent. This was almost on par with the overall results for all young people which stood at 89.2 per cent on a like-for-like basis.

The study was conducted by Scotcen, the Scottish arm of Natcen, one of Britain’s largest independent social research agencies.

The report shows MCR Pathways programme has a statistically significant and positive impact on the young person’s decision to stay on at school, the qualifications they gained and their ability to move on to a positive destination, creating changes that will last generations.

Staying on at school beyond 16

Progressing to college, university and employment

Published just before the Independent Care Review will present its recommendations, this research on MCR Pathways’ impact highlights the vital need for relationship-based practice in tackling education inequality.

The Care Review will present its conclusions on Wednesday 5 February 2020.

Since February 2017, it has heard over 5,500 stories, with over half of the voices being children and young people with experience of the care system.

The independent evaluation, commissioned by The Robertson Trust, was established to evaluate the impact of MCR Pathways’ pioneering programme on care-experienced young people. These young people represent Scotland’s most disadvantaged, with 77.6 per cent living in the 20 per cent most deprived postcodes in Scotland and almost ten per cent having English as an additional language.

“We are inspired and humbled by the findings which prove the profound impact of relationship-based mentoring on education outcomes and life-chances of our young people. Our young people who experience the greatest disadvantages, need and deserve the best we have to offer and simply flourish with the support of a mentor.

“In addition to the education outcomes, the report also underlines additional major benefits in improved school attendance, confidence, aspirations and the key components of good mental health and well-being. Our government has set well-being as a key measure of our social and economic success. Ensuring every one of our care-experienced young people become part of the MCR programme is a way to deliver this.

“We have been told by international experts that the MCR programme and its impact is world-leading. Giving all our young people the right to the support they need, will ensure we transform not just the next generation but those that follow. As a mentor with first-hand experience, I simply ask that MCR is made a permanent feature of our education system.”

“MCR Pathways is now undoubtedly proven as an intervention that has unquestionable positive social and economic impact. This truly supports the most vulnerable young people moving them forward towards a positive destination.

“We now need to work together across Scotland to embed this approach; collaborate to consolidate significant positive outcomes for Scotland’s young people.”

“The scientific literature describes the way in which a sense of wellbeing develops. A key feature is the presence in a young person’s life of a stable, sensible adult who they learn to trust and respect. This evaluation shows very clearly that process in operation. The outcomes recorded are striking. The young people being mentored can look forward to a life of stability in which they can fulfil their potential.

“Society benefits, also. The cost of failed lives as a result of adverse experiences in childhood are enormous. Recently, a calculation was published of the cost to the American economy of children born in a single year and experiencing adverse events such as abuse and neglect. Over their lifetime, these children are thought to cost the economy in excess of $1 trillion! As a much smaller country, the cost to Scotland will be much less but still considerable. MCR Pathways are clearly changing the lives of disadvantaged children but their work is also immensely beneficial to Scotland in many other ways.”

“MCR Pathways stands out as a youth mentoring programme in its scale and focus. We now know that the impact it is having for care-experienced young people in staying on at school, gaining qualifications and moving on to further study, work or training is significant. The difference it is making exceeds many programmes in other countries subject to the same kind of quality evaluation. MCR Pathways is clearly of international significance to youth mentoring.

“The evaluation is high-quality and thorough, and identifies really strong impacts. The most extensive meta-review which the authors cite shows consistent, positive but more modest impacts averaged across many youth mentoring programmes in the USA where there has been much more investment in higher quality evaluation than in the UK. MCR Pathways impacts look to be among the most significant by comparison and this study adds hugely to our knowledge base for Scotland and the UK.”

“The Care Review heard from children and young people about the positive impact that mentoring had had on them. They talked about having someone who spent time with them developing a relationship, listening and supporting them to make choices. In particular, when mentoring takes place is in schools, there is evidence that it can improve educational attainment, reduce stigma and encourage those that may not have considered it, to take up a mentoring relationship.

The Care Review will launch its conclusions on Wednesday 5th February 2020. Since February 2017, it has heard over 5,500 stories with over half of the voices being children and young people with experience of the ‘care system’, as well as adults who had lived in care, and lots of different types of families. It was their stories that guided the Care Review.”

Data for the ScotCen evaluation was provided for all young people deemed to be eligible for the programme at state-funded, mainstream secondary schools within Glasgow.

Analysis of MCR Pathways’ impact has been carried out using the most robust and highest internationally-recognised statistical model in the PSM method. The international standard was also applied with a qualitative assessment using a randomised sampling method

Eligible pupils included young people from S3 to S6 categorised as care-experienced (at home or away from home) and previously care-experienced, with data taken from 2015-16, 2016-17 and 2017-18.

The report concludes that MCR’s mentoring model, now expanding across Scotland, works as a complement to schools by supporting young people who lack consistent, one-on-one adult support. By matching them with a volunteer mentor who is independent from the school, they see a world of difference in those young people’s confidence levels, aspirations and attainment to give them a better chance at a brighter future.