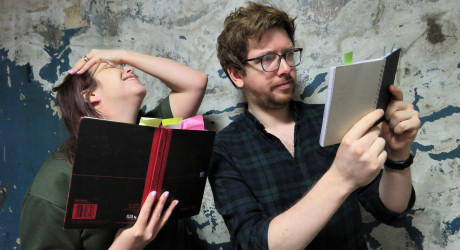 THERE are few things more embarrassing than a teenage diary, and watching ordinary Joes and Joans read theirs aloud in front of an audience of strangers is a Pure Riddy, back for a very special two-night run at the 17th annual Whyte & Mackay Glasgow International Comedy Festival in March.

Pure Riddy takes a cast of adults, most of whom are taking the stage for the first time ever, to read excerpts from buttock-clenching teenage diaries.

This year, audiences are also invited to look through their fingers at selections from readers’ vintage family albums.

“In recent years, people have been able to curate their digital presence and content online to the nth degree. Old-school notebooks do not have security settings or passwords. Social media accounts do. Pure Riddy breaks the whole idea of uber-curated identity and offers audiences a chance to hear people at their most honest, genuine and open.”

Reflecting on the show’s appeal, Meadhbh said: “On the surface of it, you’re talking about an unscripted comedy-show format. I think the audiences respond so positively to authenticity.”

Jay Bharaj, production coordinator for the Whyte & Mackay Glasgow International Comedy Festival, said: “We always like to offer audiences something a little bit different at the Whyte & Mackay Glasgow International Comedy Festival and Pure Riddy is a great example of that. I think we all cringe a bit when we remember some of the things we came out with when we were younger so I admire the bravery of all the performers! It’s sure to be an excellent show.”

Robert Wringham, who read at the first-ever show, said: “It’s such a great night. As a reader you have to bite the bullet in a way but it’s very cathartic and the atmosphere is just the best. We were all so silly as teenagers, not to mention gross and melodramatic and insecure, so Pure Riddy ends up being a mutually supportive laugh-in. It’s group therapy at its finest and properly hilarious.”

MEDIA RELEASE issued by Meadhbh Hendrie. You too can share your stories (aka press or media releases), on this site. Email here for more information.