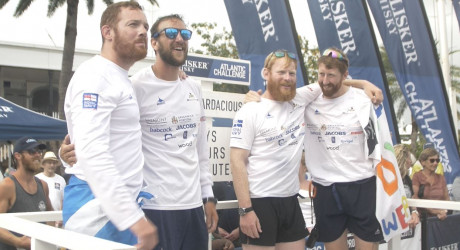 A TEAM of four British submariners who accomplished a 3,000-mile row across the Atlantic Ocean last week, reflected on their time on board a 28ft rowing boat, comparing it to being over 800ft under the sea.

HMS Oardacious are the first-ever serving Royal Navy team to have taken on the Talisker Whisky Atlantic Challenge and have so far raised over £105,000 for mental health and wellbeing with the Royal Navy and Royal Marines Charity.

The team, made up of Lieutenant Hugo Mitchell-Heggs from Somerset, Lieutenant Callum Fraser from Basingstoke, Petty Officer Dylan Woods from Northern Ireland and Leading Engineer Technician Matt Harvey from Kirkaldy, were crowned the fastest-ever serving military team to cross the Atlantic – in just 37 days, 6 hours, 40 minutes.

Following a courageous return to land, the team were asked just how their time serving as submariners for the Royal navy prepared them for their Atlantic row.

“That resilience that is instilled by the Royal Navy to do your best in every situation, not just as individuals but as a team to push through and look out for each other is very much born into you from day one,” began Fraser.

“We learn to identify when those around you are starting to struggle and pick them up and do whatever we can to get them out of their shell. That might just be to wind them up or have an argument but that is much better than them sitting in silence,” said Fraser, in reference to the mental health and wellbeing charity that they are raising money for.

He continued: “Dealing with the same people, day in and day out, in very close confinements is what you do on submarines, so we found ourselves slipping into old patterns of stupid stories and keeping each other entertained with Dylan’s sea shanties, Hugo’s rugby stories and Matty’s ‘Would you rathers?’.”

Two more advantages in being a submariner over other teams that they mentioned, was their familiarity with being on watch patterns and shaken awake at odd times through the day and night.

Fraser continued: “The second and probably most important bit is the time that we spend away from home. Normally, we go away for over three months at a time with no contact from family except vetted telegrams already read by five different people. The challenge was a bit of a luxury by comparison being able to pick up the sat phone whenever we wanted and have a five-minute call to home which you can’t do on a submarine.

“This is sadly something that the families of submariners have to get used to and my girls even have their own ‘huggable hero’, which is essentially a miniature version of me to cuddle and take to school when I’m away at sea.”

Engineer, Woods, mentioned the fact that he has held a spanner almost as much as he held an oar: “In the army, we are used to being in a situation where, if something is broken, you have to fix it, there is no-one coming to help you, just like during this challenge.”

When asked to compare living on the rowing boat to a submarine, Heggs joked: “I think a submarine probably has a higher comfort rating on TripAdvisor than a rowing boat.

He continued: “The food is definitely not as good as on a submarine and we survived mostly on dehydrated rations which gives you serious heartburn and is impossible to keep your energy levels up when you are burning around 10,000 calories a day, especially with the added joy of dealing with sea sickness.”

Fraser then came in: “If anyone is desperate to lose weight, and is willing to do it by any means, then rowing across the Atlantic really does work. We all lost a huge amount of weight, from 13kg to 18kg each.”

When asked about the toughest aspect of the challenge, the team spoke of salt sores in unexpected places and getting to the start line.

“It is a huge campaign,” began Mitchell-Heggs. “We started planning about 18 months before and it took a huge effort and amount of collaboration and support from our support team, amazing sponsors and the Royal Navy who helped us prepare and build relationships that were already there for sponsorship.

“We are all serving submariners and as such have full-time jobs, so the amount of effort it took spending evenings and weekends – not just on media but training, fundraising, going out and shaking buckets to raise as much money as possible – was tough.”

When asked what their next challenge would be, the team echoed: “At the moment it is all about sharing the story to inspire others to do things like this and realise that you can go from an idea on a piece of paper to getting four people across the Atlantic.”

They continued: “We haven’t just raised a phenomenal amount of money for charity but we have also been showcasing ourselves to the sea cadets, working with schools and building relationships with some of our sponsors who have supported us.”

Fraser ended: “It has opened up my eyes to some of the amazing things that you can do in life and whilst my wife wouldn’t appreciate me suggesting going away for a long time again doing something a bit more adventurous and a bit more out the way… maybe K2, but I think my next challenge is getting myself to the barbers.”