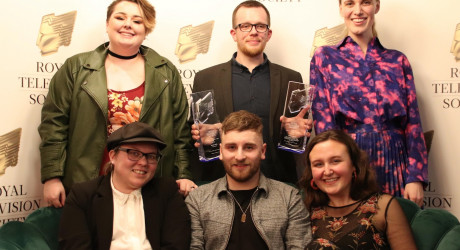 The University of Edinburgh led the way on the night, taking home four awards, with The Royal Conservatoire of Scotland following with two wins, retaining the gong for both Drama and Writing for a second year running.

James Wilson, chair of RTS Scotland Student Television Awards, said: “Our industry depends upon the development of young people, their skill growing with their confidence under the guidance of their tutors and mentors. This year’s programmes are as strong as ever and decisions were long argued and
often very close. Every nominated team and individual should be proud of their achievement.”

“As last year, all the nominees will be offered a platform to showcase their fantastic programmes on the STV Player, where four-fifths of the Scottish population are already registered users. Highlights of the awards ceremony will also be available on the STV Player and beyond that STV will be offering mentoring to the winners as they start their journey in this exciting and vibrant industry.”

All nominated and winning films will be available on STV Player from 12th February 2020: https://player.stv.tv/summary/rts-student

We Three – Will Peppercorn, George Harwood and Grace Dickson (University of Edinburgh)

WINNER – Adam and the Alphas – Murray Leitch (University of Stirling)

About The Royal Television Society:

The industry’s most talented individuals give us an insight into the work that goes into making cutting-edge contemporary TV. From Government ministers and CEOs to workshops with great runners, our events look at every part of the business.

Each year, we offer Television Production and Technology bursaries to help those from less affluent backgrounds get a foothold in the industry, and Masterclass sessions bring together students, academics and industry heads.

Global television leaders gather to discuss what the future holds for television at our London Conference or the RTS Cambridge Convention.

Alongside our engaged community of over 4,900 full members, the Society is supported by Britain and the world’s biggest broadcasters, producers and consultants, including Principal Patrons BBC, Channel 4, ITV and Sky.

Today, 15 regional and national groups curate lively events and awards around the UK and Ireland, from Glasgow to Galway.

RTS Futures, which is aimed at those in their first two years of employment, organises an exciting roster of discussion, training and social occasions. Recent events have included workshops on learning how to format shows and how to survive as a freelancer, and expert panels explaining how
to be the best researcher and how to make it on-screen.