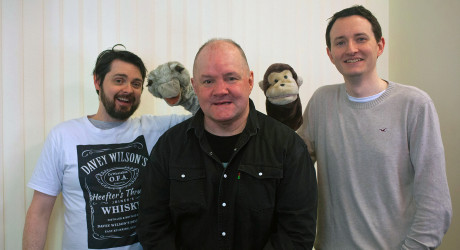 The film, starring actor Duncan Airlie James (former six-time world Thai Kickboxing champion) is a sequel to the 2012 short comedy puppet film, The Greyness of Autumn, which enjoyed success at film festivals around the world and picked up the Best Short Comedy accolade at the 2015 edition of the People of Passion Film Festival in Australia.

Written by Andy S. McEwan and Chris Quick, the film sees the return of puppet duo, Danny and Nelson, on another whirlwind adventure as Danny’s love life continues to be in a state of disrepair.

Following the success of The Greyness of Autumn, demand for a sequel skyrocketed and a crowdfunding campaign was launched on Kickstarter to raise funds to make it happen. The campaign successfully raised £1,500 from backers all over the world including a donation from former Scottish GamesMaster host, Dominik Diamond.

Autumn Never Dies will premiere on YouTube on the 21st of March for 72 hours before it is taken down again to begin its festival run on the international circuit.

Photos and interviews available upon request.

MEDIA RELEASE issued by Suited Caribou Media and Pentagram Productions UK. You too can share your stories (aka press or media releases), on this site. Email here for more information.