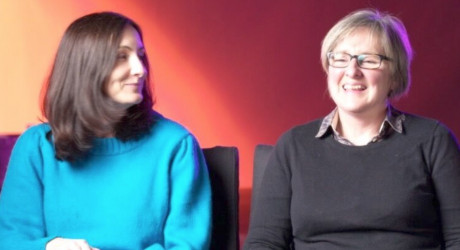 A NEW documentary on BBC ALBA, about the founders of Glasgow City FC, reveals they nearly gave up the club when their personal circumstances made it difficult to carry on.

Carol Anne Stewart (‘Cas’) and Laura Montgomery (pictured left) set up the football club in 1998 to create opportunities for women and girls in the football world.

Denied a pathway into football when they were growing up, the formidable duo were determined to change things for the future generation of girls.

Laura (44), from Clarkston in East Renfrewshire, said: “Even as a young kid, I would never accept that girls shouldn’t be allowed to do something… even though everyone perceived that as the norm, I certainly didn’t perceive it as the norm and I set out to change it.”

However, in exclusive interviews for the programme, they have revealed that they were very close to giving it all up at the height of the club’s success in 2016.

It was around this time that Cas and Laura were dealing with crippling personal issues.

Laura’s partner of 16 years, Kat Linder, was struggling with mental health illness and Cas’s brother was diagnosed with a terminal illness – Motor Neurone Disease (MND), and they discussed whether they could continue running the club because they wanted to be there for their loved ones.

Cas said: “The Christmas before Kat died… we both said, ‘I’m really struggling here, I can’t get on’, and Laura said, ‘I think I might have to give it up… because I need to be around for Kat to help and support her’… and I said, ‘Well, what do we do?’”

Cas’s brother sadly died in August 2017, aged just 48, and in February last year Laura received the devastating news that her partner, Kat, had tragically taken her own life.

Laura said: “The day Kat died is the worst day of my life and always will be. Kat was my world.

“When you lose that one thing that is the real reason to get you up in the morning, you realise that you don’t get as much enjoyment out of stuﬀ… when something good happens to me or something quirky, the only person I want to tell it to, is Kat, but… she’s not there to tell anymore and it’s… it’s really challenging, I really
miss her.”

Writer, producer and director, Margot McCuaig, said: “Since childhood, Cas and Laura have pushed against stereotypical perceptions that football is a man’s game and have worked hard to break down gender barriers.

“In realising their ambition to create their own football club they have subsequently created opportunities for girls to follow their dreams in a welcoming environment.

“Their ongoing work ethic has been consistently remarkable and this film goes some way to providing an insight into Cas and Laura’s role, not just as trailblazers in women’s football, but as pioneers creating a transformation in Scottish society.”

Glasgow City FC face challenges in the future due to ever increasing competition but it comes as no surprise that Laura and Cas have a plan up their sleeve.

The Women Who Built Glasgow City will be shown on BBC ALBA on Sunday, April 5 at 9pm. It will be available for 30 days on BBC iPlayer.