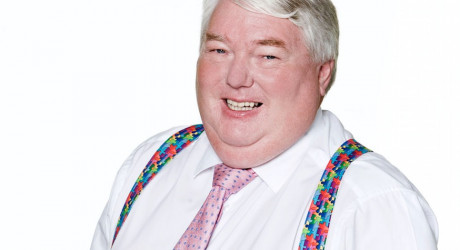 BRIAN Taylor, BBC Scotland’s stalwart of political reporting, is retiring after a 35-year career with the broadcaster.

Renowned for his razor-sharp reporting and analysis – as well as colourful ties and braces – Brian will be leaving the centre stage of political reporting at the end of October.

Brian joined the BBC in 1985. After a spell co-presenting the political programme, Left, Right and Centre, he was appointed political correspondent and then political editor in 1991.

Before joining the BBC, Brian worked in newspapers for eight years including six years as a lobby correspondent at Westminster.

Brian said: “It has been a pleasure, a privilege and, not infrequently, a source of innocent merriment to have worked as a broadcast journalist, covering politics – and particularly Scottish politics – for such a prolonged period. At all times, I have tried to stand on the side of the people, our varied and valued BBC audiences.

“To find stuff out – and tell folk about it. Also, to analyse that stuff and explain why it matters. Whether on telly, the wireless or online.

“As a journalist, starting first in newspapers, I have covered every Prime Minister since Callaghan – and every First Minister since the reconvening of Scotland’s Parliament.

“It has always been my endeavour to offer robust but fair coverage and I am certain my BBC colleagues will continue to pursue those aims. It’s been great working alongside such talented and thoughtful individuals. But nae man can tether time nor tide. Stepping back seems right.

“However, I am not stepping aside entirely. I would hope to be able to play a role – albeit a different role – in helping chart Scotland’s future.”

Married with two sons, Brian was born in Dundee in 1955 and is a former pupil of the High School of Dundee. He graduated M.A. with Honours in English from the University of St Andrews.

He has written two books on politics and co-written several more. He is the author of The Scottish Parliament, a definitive account of the road to devolution and its consequences, now republished in revised form.

He updated that narrative in Scotland’s Parliament: Triumph and Disaster which analysed the early years of the new Parliament.

Gary Smith, BBC Scotland’s head of News, said: “As BBC Scotland’s political editor for nearly 30 years, Brian has become something of an institution, with his insights, analysis and colourful turn of phrase. He is an honorary professor, an author, a lover of literature, theatre and golf, and – it’s been rumoured – a bit of a fan of Dundee United. A 21st-century ‘Renaissance man’.

“He will be a huge loss to us, and I personally will miss his wisdom and wit. But I’m sure we’ve not seen or heard the last of him on our airwaves.”

The process of recruiting Brian’s successor as political editor will begin in the coming weeks.