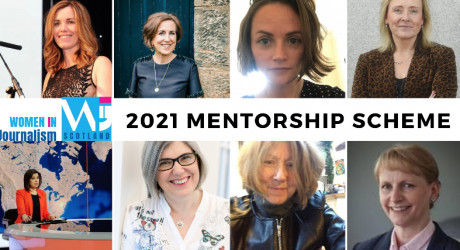 WOMEN in Journalism Scotland has launched its inaugural mentoring scheme, building on the success of a similar initiative run by its partner organisation Women in Journalism UK.

Its aim with this pilot programme is to link up eight emerging Scotland-based journalists with some of the most successful women in the industry.

The eight early-to-mid career journalists will be chosen to take part in the year-long programme, which will include at least an hour a month of their mentor’s time, by video conference or by email.

Speaking about the scheme, Women in Journalism Scotland chairs, Catriona MacPhee and Jan Patience, said: “This mentoring programme will help to level the playing field for eight up and coming women journalists, who, evidence shows, sadly still face discrimination in terms of pay and promotions.

“There are many hugely talented women journalists working in Scotland and it’s really encouraging to see how readily those in senior positions are willing to give those who are starting out a hand up.

“We hope these pairings will prove fruitful to both sides and help the mentees reach their full potential, whether that be in securing the job they’ve always wanted or achieving a happy work life balance.”

Applicants to the pilot mentoring programme will be selected by a panel led by Patience and MacPhee. The panel, which will also include project lead Gabriella Bennett, a journalist with The Times in Scotland, will closely study all the answers to the questions posed in each application and base its final decision on the journalists proving how much they would benefit from the programme.

An additional factor will be which applicant best fits the skills and experience of the eight mentors currently lined up.

The deadline for applying to be part of this scheme is Friday 4 December 2020.

Applicants must be a member of Women in Journalism Scotland.

Donalda has recently retired from her post as director of BBC Scotland. She was responsible for 13 BBC centres, with more than 1,000 staff. She sponsored work-to-advance career progression for women and improve workplace culture. A graduate of the University of Edinburgh, Donalda began her career as a teacher. She has held various board-level roles, is a certified executive coach.

Melanie Reid began as a graduate trainee on The Scotsman in 1980 and held senior positions at the Sunday Mail and The Herald. In 2007 she joined The Times and since 2010 has written Spinal Column in The Times Saturday magazine. She’s been columnist and journalist of the year at Scottish and UK Press Awards. In 2014 she co-wrote, with Gregor Fisher, his memoir The Boy from Nowhere. Her own best-selling memoir, The World I Fell Out Of, was published in 2019 and won the Saltire Prize for non-fiction.

Sally Hampton oversees a diverse portfolio of UK and Scottish interest magazine brands. Her role involves identifying opportunities to grow existing DC Thomson Media titles through innovation and expansion – and launching new products across a variety of platforms. Most recently, she was a key member of the team that delivered Platinum magazine, one of the biggest launches in consumer magazines in recent times. Sally is currently chair of PPA Scotland.

Halla Mohieddeen is a principal presenter with Al Jazeera in Doha. Before moving back into 24-hour international news, she launched STV News Tonight, bringing local, national and international news to a Scottish audience. She has a wealth of international experience, working as a journalist and presenter in Asia, the Middle East, mainland Europe and Scotland.

Heather has been in Scottish radio for 20 years; starting out as a trainee broadcast journalist rising to group head of news before moving into programming. Currently, she is a lead editor at BBC Scotland overseeing speech and topical programmes for BBC Radio Scotland as well as working across multi-platform productions. She previously worked in the commercial sector, running radio stations across the UK as group programmer for Communicorp UK for brands including Capital, Smooth and Heart.

Kirsty Wark has built up a reputation as one of the UK’s most formidable and versatile television journalists. She is best known as an anchor on the BBC’s flagship news and current affairs show Newsnight. Kirsty has several major accolades to her name including BAFTA Awards for Outstanding Contribution to Broadcasting, Journalist of the Year and Best Television Presenter.

Catherine Coyle graduated in law before deciding to write. She combined the two, editing FIRM magazine (a lifestyle mag for lawyers), got a grounding in grassroots journalism at The Big Issue in Scotland magazine, and freelanced along the way before finding her natural home at Homes & Interiors Scotland magazine where she is assistant editor.

Gina Davidson has been a journalist for more than 25 years, working across newspapers and television, and after a brief sojourn in Scottish politics, she is back in news as deputy political editor at the Scotsman. She was named Journalist of the Year in the 2013 Scottish Press Awards and was last year the recipient of the Nicola Barry Award.

We believe mentoring has the ability to change the future of journalism. That future features a more confident, diverse workforce, a greater prevalence of female voices and more women in senior positions.

MEDIA RELEASE issued by Women in Journalism Scotland You too can share your stories (aka press or media releases), on this site. Email here for more information.