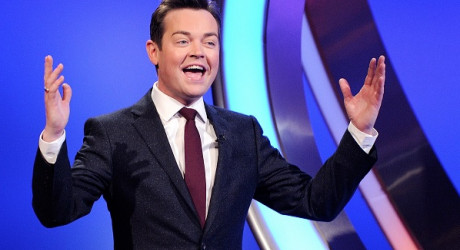 AWARD-winning indie, STV Studios, has been commissioned to produce a new spin-off of its hit game show, Catchphrase, for ITV and STV.

3 x 60′ series Catchphrase: Catchiest Moments will see regular host, Stephen Mulhern (pictured),
looking back at some of the iconic show’s best bits since it was successfully revived by STV Studios in 2013.

The series, which will include highlights from both the regular show and its celebrity edition, will also reveal some hilarious never-before-seen moments that didn’t make it to air first time around.

Catchiest Moments will air on ITV and STV on Saturday evenings, launching on 21 November.

Highlights in the first episode include Gemma Collins not knowing how to play the game – before making a miraculous comeback – and Tim Vine becoming increasingly frustrated when faced with a catchphrase he describes as “the biggest mystery of [his] life”.

Earlier this year, Catchphrase became the first major UK entertainment show to return to production following the first national lockdown. Filming has now wrapped on the fifth celebrity series – due to air in early 2021 – and Catchiest Moments has been commissioned to ensure viewers have their fix of the popular Saturday night staple until then.

Ratings for the fourth series of Celebrity Catchphrase, which aired on ITV and STV between September and October, peaked at over four million viewers.

Gary Chippington, head of Entertainment at STV Studios, said: “Stephen loves the show so he had a tough time picking his favourite Catchphrase highlights from the last seven years – but, after much deliberation, we’re really excited to be able to share this selection of Catchiest Moments with viewers on ITV and STV.

“We’ve had a successful year at Catchphrase, with ratings remaining strong and production on our fifth celebrity series being completed despite the challenges posed by Covid. We’re delighted that this spin-off has been given the ‘green light’ to remind our viewers of their favourite bits and treat them to some unseen treasures.”

Gemma John-Lewis, Entertainment Commissioning at ITV, said: “Catchphrase has had so many hilariously brilliant highlights over the years and, with the infectiously funny Stephen Mulhern at the helm, viewers will be able to sit back and enjoy some classic TV moments from one of the country’s best-loved game shows.”