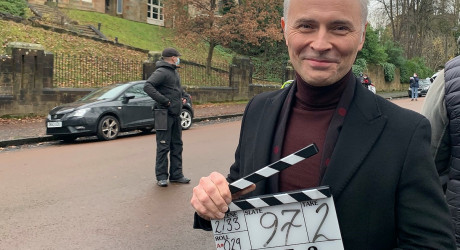 The new four-part series is once again written by Neil Forsyth (Eric, Ernie And Me, Bob Servant), co-produced by Expectation and Happy Tramp North and is supported by Screen Scotland’s Broadcast Content Fund.

The second series is another twisting, surprising story which picks up the action two years after the dramatic finale which saw two disparate brothers, Max (Mark Bonnar) and Jake (Jamie Sives) face the consequences of their guilt after accidentally killing an old man.

In this new second series, characters old and new will battle the consequences of their guilty actions, amidst shocking new developments.

The new series of Guilt is expected to air on both BBC Two and BBC Scotland in 2021.

Mark Bonnar (pictured) – who plays flawed lawyer, Max – is delighted to be back filming Guilt again.

He said: “I’m completely overjoyed that Guilt is getting a second series! Neil has crafted four amazing scripts with some cracking new characters and an immensely involving plot, full of twists and turns. He’s really putting us through the mill!

“And of course, I’m over the moon to be working with Jamie again.

“We’ve assembled a fantastic crew – many returning from series one – and I know they’re just as excited as us to be a part of this wonderful show.”

Writer and executive producer, Neil Forsyth, adds: “I’m delighted that we’ve been given the opportunity to continue the Guilt story. Once again, we have an amazing cast and creative team and I can’t wait to see them bring the scripts to life.”

Guilt aired on both BBC Two and on BBC Scotland in 2019. To date, the joint commission has been watched by three million people across the UK, with more than half a million of those in Scotland, and it was the most-requested BBC Scotland title on BBC iPlayer during its initial linear run.

The commissioning editors for the BBC will be Gregor Sharp and Gavin Smith and the indie executive producers will be Neil Webster for Happy Tramp North and Nerys Evans for Expectation. Guilt will be internationally distributed by BBC Studios.