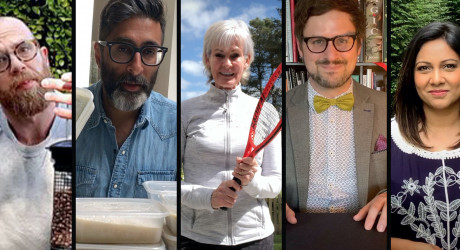 JUDY Murray, Sanjeev Kohli and magician Kevin Quantum are amongst those helping to bring a raft of dedicated educational content to pupils in Scotland once again from Monday next week (11 January) on the BBC Scotland channel, iPlayer, and online to help plug any learning gaps caused by the enforced schools closure.

As happened last sprin,g during the first national lockdown, the BBC has moved quickly to offer Bitesize learning content aimed specifically for pupils studying in Scotland on its dedicated Scotland channel – initially covering Maths, English, Science and Social subjects for primary and secondary pupils – and also lots more additional new Bitesize online content on topics such as health and weather.

From 10am every weekday, the BBC Scotland channel will offer a range of programmes for primary and secondary learners.

Focussed on the Curriculum for Excellence and complementary to the Bitesize Daily offering on CBBC, there will be programmes for primary around numeracy, literacy and social subjects including quizzes and wordsearches to help keep kids engaged.

There will also be another chance to see animated stories and celebrity-led lessons from the likes of Judy Murray, who teaches us how to stay active even in a small space, Sanjeev Kohli who brings the fun to maths and magician Kevin Quantum with his unique take on science.

Secondary learners will also be offered a range of content around maths, science and literacy while Authors Live will feature an archive of events for both Primary and Secondary audiences, with writers including Michael Rosen, Malorie Blackman and Steve Backshall reading aloud from their work.

The programmes, some made both before the pandemic and some over the last few months under strict Covid-working conditions, will be broadcast each weekday whilst also being available through iPlayer for students to watch at their leisure.

Learners throughout Scotland also will now have a newly created website accessed easily for both English and Gaelic content  bbc.co.uk/lockdownlearningscotland  with both existing and new additional educational content available online  while BBC ALBA will also offer dedicated programmes for Gaelic pupils.

BBC ALBA will  have a range of programmes to support learning such as Baile Mhuilinn, A’ Bhùth, Leugh le Linda, Aithne air Ainmhidhean and Saidheans Spòrsail and they will be screened in the daily CBeebies and CBBC ALBA schedule with all programmes being made available through iPlayer after transmission.

Additional programmes will also be made available within a learning collection on BBC ALBA’s iPlayer channel from 11th January through to 2nd April. This will include primary content with a focus on maths, numeracy, literacy and history.  The collection will also include a range of Bitesize video content produced in Gaelic for primary maths, science, literacy and social studies.

Further learning resources for primary and secondary school children at National 5 and Higher is accessible through the Bitesize website, bbc.co.uk/lockdownlearningscotland with pre-school resources available through bbc.co.uk/cbeebiesalba

The dedicated Scottish content is part of the  overall BBC plan to deliver the biggest education offer in its history across more of its platforms. It will bring together BBC Scotland, BBC ALBA, BBC Two, CBBC, BBC Red Button, BBC iPlayer and online to deliver a new education offer to children, teachers and parents as a third lockdown begins.

Reacting quickly to the news of UK schools moving to remote learning, the new offer from the BBC will ensure all children can access curriculum-based learning even if they don’t have access to the internet.

From Monday, each week day on CBBC will see a three-hour block of primary school programming from 9am including BBC Live Lessons and BBC Bitesize Daily, as well as other educational programming such as Our School and Celebrity Supply Teacher and much loved titles such as Horrible Histories, Art Ninja and Operation Ouch.

BBC Two will cater for secondary students with programming to support the GCSE curriculum, with a least two hours of content each weekday.

Content will be built around Bitesize Daily secondary shows, complemented by Shakespeare and classic drama adaptations alongside science, history and factual titles from the BBC’s award winning factual programming units.

Bitesize Daily primary and secondary will also air every day on BBC Red Button as well as episodes being available on demand on BBC iPlayer.

Tim Davie, BBC Director General, said: “Ensuring children across the UK have the opportunity to continue to follow the appropriate core parts of their nation’s school curriculum has been a key priority for the BBC throughout this past year.

“Education is absolutely vital – the BBC is here to play its part and I’m delighted that we have been able to bring this to audiences so swiftly.”