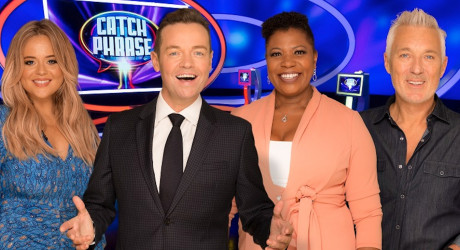 The sixth series of the iconic programme, hosted by Stephen Mulhern, will feature 13 episodes – more than in any one series since the show’s launch in 2013.

Initial production on the series has already begun, with filming set to commence in April. The new run is expected to air as part of ITV and STV’s autumn/winter 2021 schedule.

The current series of Celebrity Catchphrase featured the highest-rated episode of the programme ever, entertaining a peak audience of six million viewers on Saturday 9 January.

The show has been a consistent ratings winner for ITV and STV, with episodes aired in 2020 reaching a total of 18.6 million people across the UK.

Gary Chippington, creative director of Entertainment at STV Studios, said: “It’s hard to believe we’re preparing to make our sixth series of Celebrity Catchphrase, and the fact that we’ve landed our biggest-ever commission six series down the line is testament to the enduring popularity of this much-loved show.

“We’re grateful for ITV’s continued commitment to the brand, and can’t wait to get back in the studio with Stephen to make 13 new episodes of fantastic family entertainment for our ever-loyal viewers.”

Gemma John-Lewis, Entertainment Commissioning at ITV, said: “Catchphrase is such a huge hit with our viewers and we are delighted that fans will be able to continue to say what they see with this brand-new series.”