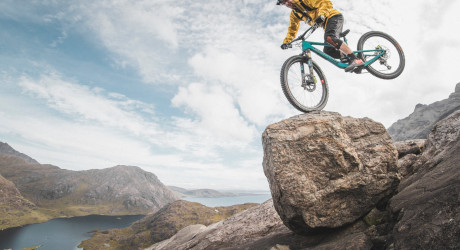 For his latest extreme challenge, Danny returns to the Isle of Skye to climb and ride down the legendary Dubh Slabs on the edge of the Cuillins, one of the most remote of Scotland’s classic moderate climbing routes with some of the finest friction slabs.

Danny’s latest video, a We are Peny Media production directed by both Robbie Meade and Danny, shows the biking professional scrambling to just below the summit of Sgurr Dubh Beag / Little Black Peak (733m), one of the most technical sections of the Dubh Ridge, unroped, with his bike strapped to his back.

From here, the real test begins.

Set against the magnificent backdrop of unrivalled mountain wilderness views, Danny navigates his way down the seriously technical 900-metre route, over a very steep ledge system of black ‘boiler-plated’ Gabbro slabs, exposed steps and drop-offs, buttresses and grassy clefts, to the shores of Loch Coruisk at sea level.

Danny MacAskill, the world-renowned street trials and mountain bike rider and YouTube sensation from the Isle of Skye, said: “I was pretty nervous tackling a lot of the obstacles on the route.

“The most challenging part was definitely the final 200-metre slab vertical section, which on the first day was just not possible to ride. It was very exposed and had a very difficult run out.

“This made the grip, braking and balance very difficult. You literally feel gravity just pulling you down the rock and when the only thing stopping you is your brakes you really feel how steep it is. Luckily, it all worked out and I managed to get off the slab onto the grass reasonably controlled.

“As much as I enjoyed riding the Dubh Slabs, the most memorable emotion was the relief and satisfaction heading back over the loch on the boat after finishing the filming!

“I really hope everyone enjoys this video and we hope it inspires some fun bike adventures when we are allowed to properly explore Scotland again.”

The 34 year-old Scot is widely known as one of the most entertaining content creators the world has to offer. More than 11 years after his breakthrough video, ‘Inspired Bicycles – April 2009’, that included mind-blowing stunts filmed at iconic locations across Edinburgh, was uploaded to the internet, this and his many other video projects have racked up well over 300,000,000 views on various YouTube platforms.

The Ridge (October 2014), Danny’s last feature video filmed on Skye, where he tackles the ‘Inaccessible Pinnacle’ on the Cuillin Ridge, has been watched at least 74,576,094 times on YouTube!

Further action and behind the scenes images (hi-res) can be downloaded from Dropbox. Please credit photographer – Dave Mackison:

(See below for more background to the project and quotes)

Directed by Robbie Meade (We are Peny Media – https://www.wearepeny.com) and Danny MacAskill

Background to the project

Danny launched his own YouTube channel in 2019 and continuously works on finding ways to creatively cross the boundaries of imagination and produce unique, breathtaking content.

Danny has always been a massive fan of rock climbers and, in particular, the American free climbed, Alex Honnold (who completed the first free solo ascent of the 2,900-foot Freerider route of El Capitan in 2017) and Tommy Caldwell (who, together with Kevin Jorgeson, was the first to free climb the Dawn Wall of El Capitan in 2015).

Inspired by their achievements he was keen to film another technical mountain challenge descending on his bike. He came across the Dubh Slabs last summer (2020) when climbing with some school friends.  Immediately, he saw the potential of the terrain and riding obstacles on the face and knew he needed to come and tackle it for his next project.

2020 has obviously been a tough one in every respect. He had a few big projects planned for 2020 which had to be cancelled. When things opened up and travel was permitted again he and a small crew pulled things together for a two-day shoot in September 2020 on a much smaller scale than recent sponsored, bigger-budget projects.

Duncan Shaw, producer of Danny MacAskill – The Slabs, business partner and fellow street trials rider, talked about the challenges of a project in such a remote area of Scotland. He says: “Danny and I are always searching for exciting terrain and great backdrops for film projects. The biggest challenge of this shoot was access. Whilst the range is not on an island, the easiest and quickest way to get to the foot of the range is via local fishing boats. After the 20minute boat ride there is a 45minute walk to the foot of the Dubh Slabs. Once there we then had to scale a rock face with all our kit on this challenging climb that should be roped in sections.

“The terrain was so steep it was near impossible to film Danny’s ride using traditional methods. Our main camera, GoPro Hero 9, was mounted on a custom Built FPV drone, with two additional POV GoPro Hero 9’s positioned on Danny’s helmet and chest.”