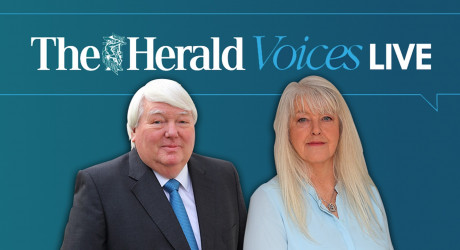 THE BBC’s former Scottish political editor, Brian Taylor, has joined The Herald in a major expansion of the newspaper’s Voices section – the platform for some of the country’s best writers to debate the biggest issues in Scotland.

Taylor is one of a number of new, high-profile writers to join the newspaper, including the hugely popular former Scotsman columnist, Lesley Riddoch, ex-Labour MP Brian Wilson, and The Scottish Farmer’s political affairs editor, Claire Taylor.

Professor of public health and Covid expert, Linda Bauld, also joins our award-winning team of health journalists with a regular column, as Scotland navigates its way out of the pandemic crisis.

Brian Taylor, who spent ten years working in newspapers before going on to have a long and distinguished career as a broadcast journalist for the BBC in Scotland, will add expert analysis to the paper’s top political team ahead of one of the most important elections in the country’s history.

In sport, former Scotland managers, Alex McLeish and Shelley Kerr, will spearhead the paper’s coverage of Euro 2020, while Adam Hastings, the Glasgow Warriors fly-half, will contribute a regular rugby column during major events like the 6 Nations and the Autumn Tests.

The Herald is also launching ‘Voices Live’, a new platform for digital-only content every day which will be exclusive to digital subscribers, including a weekly column from comedian, Janey Godley, and additional comment, analysis and insight from our regular top writers like Iain Macwhirter, Neil Mackay and Alison Rowat.

In addition, a series of exclusive virtual events for subscribers will be launched in April, along with new podcasts, and innovative ways in which readers can interact with our journalists. More details will be released in the coming weeks.

You can subscribe to The Herald for just £2 for two months at www.heraldscotland.com/subscribe.

Brian Taylor said: “I am delighted to be joining the team at The Herald. Before a lengthy career in broadcasting, I spent nearly a decade working in newspapers.

“Now I’m back, albeit in a different role in a very different media set-up. Through all the changes, however,

“The Herald has remained true to its objective of serving the people of Scotland with honest reporting, frank analysis and open discourse. I look forward to playing my part.”

Lesley Riddoch said: “It will be great to write for The Herald about the whole gamut of social and political issues facing Scots.

“I’ve spent most of the past 20 years arguing for land reform and more genuinely local control and as director of the policy group, Nordic Horizons, I’m keen to encourage Scots to know more about small countries that share our population size and latitude.

“Realistically, though, the constitutional question will dominate Scottish political life until a second indyref resolves it.”

Donald Martin, editor-in-chief at The Herald, said: “Brian Taylor is a giant among political commentators, having provided BBC Scotland viewers and listeners with intelligent, well informed analysis for many years. Free of the shackles of the BBC, his weekly column will be one not to be missed.

“Lesley is also a highly respected, powerful voice for Scotland and we’re also delighted to have her come on board. Together, they will strengthen our team of brilliant writers and provide powerful voices for Scotland, ensuring our digital subscribers and print readers have the best package of opinion, analysis and insight from a Scottish perspective.”

MEDIA RELEASE issued by Newsquest Scotland You too can share your stories (aka press or media releases), on this site. Email here for more information.