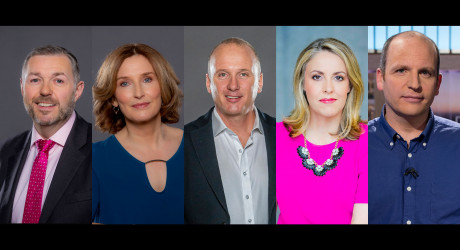 BBC Scotland has unveiled its plans for coverage of the Scottish Parliament election, which will include two televised debates with the leaders of five parties.

The debates – at the start and the end of the campaign – are part of a broad range of content across television, radio and online, focusing on the big issues that matter to voters.

The first leaders’ debate airs at 7.50 pm on Tuesday 30 March on BBC One Scotland and will be presented by Sarah Smith.

Podlitical, the broadcaster’s weekly political podcast, will run special editions to analyse the big moments in the campaign.

There’ll also be a postcode checker so that voters can easily access profiles of their constituencies, information on candidates and the results as they come in.

In a new initiative for BBC Scotland, a voter panel – comprising a cross-section of members of the audience – will be informing the broadcaster’s output across all platforms with their stories, opinions and questions.

Debate Night will be on air each Wednesday on the BBC Scotland Channel, focusing on issues including Covid recovery, education and climate change, with an audience for one of the programmes made up of young voters.

The late edition of Reporting Scotland will be extended two nights a week to become a half-hour programme – The Campaign.

There’ll be major interviews with the party leaders – by Martin Geissler on the Sunday Show; and by Gary Robertson and Laura Maxwell on Good Morning Scotland.

News reporter, Ian Hamilton, accompanied by his guide dog, Major, will present two people-centred half-hour specials on the election for the BBC Scotland channel from around the country, in the style of his successful My Kind of Town series.

Over the coming weeks, BBC Scotland political editor, Glenn Campbell, and BBC Scotland’s team of correspondents and reporters, will report and analyse the twists and turns of the campaign.

BBC Naidheachdan will bring the Gaelic audience the latest news with a series of An La specials and extended reports on Radio, TV and Online.

The An Taghadh 2021 index will be published online, alongside specially commissioned election material on social media.

On English-language and Gaelic programmes and platforms, there will be full coverage of the election results from all the key counts. Special coverage will run across Friday 7th May, Saturday 8th, and into the Sunday if there are still results outstanding.

There’ll also be a sideways look at the campaign with Chief Inspector Miekelson (Jack Docherty) taking the temperature of the nation, covering the hottest topics and talking truth to power in Scot Squad – the Chief Does Democracy.

As well as quizzing politicians for the hour-long show on the BBC Scotland channel, the Chief examines issues such as law and order and consults the biggest expert of the lot – himself.

Gary Smith, head of News and Current Affairs at BBC Scotland, said: “With Covid restrictions still in place, this will be a challenging election campaign to cover. But our news and current affairs teams will be offering comprehensive reporting and analysis from round the whole of the country. We aim to give our audiences the facts so that they can engage with and debate the issues that will make this such an important election for the future of Scotland.”