Media release: A bit of ‘This and That’ for stunt riders, Danny MacAskill and Kriss Kyle 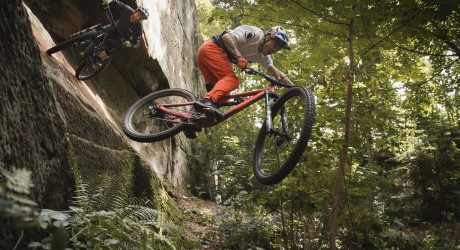 Scottish stunt riders, Danny MacAskill and Kriss Kyle, launch their new feature video, ‘This and That’, presented by Endura, on YouTube

DANNY MacAskill has today, Tuesday 04 May 2021, launched a new feature video, Danny MacAskill and Kriss Kyle – This and That, on his YouTube channel.

For his latest feature, presented by Endura, Danny teams up with fellow Scot and BMX wizard, Kriss Kyle, in their first video project together, to hit both the extensive woodland trails and sandstone quarry cliffs of Nescliffe in Shropshire, and the testing street obstacles of Blackpool’s seafront.

This and That, a We are Peny Media production directed and edited by Robbie Meade, showcases both Endura riders switching seamlessly between mountain bikes and BMX and street trials bikes to show off some jaw-dropping stunts, gravity-defying tricks, and outrageous wipeouts, capturing perfectly the huge amounts of fun to be had when riding bikes with friends.

Make sure you witness Danny and Kriss’s action-packed and adrenaline-fuelled two centre riding adventure, and brace yourself for Danny’s Blackpool balancing act!

Danny MacAskill, the world-renowned street trials and mountain bike rider and YouTube sensation from the Isle of Skye, said: “Kriss and I are good friends. We often ride together for fun. He was also one of the team in our sell-out ‘Drop and Roll Live’ stunt show at the Edinburgh Fringe in 2019.

“However, this is the first time we have worked together on a film project, so we were determined to make the best film we could.

“Like so many plans over the past year, this film project constantly evolved. Kriss and I wanted to make a video with some international riders.

“When they weren’t allowed to travel, we were still keen to get on the road when we could and make the best of the bad situation. It was amazing to get together with Kriss and the crew, working on something new, a film that would capture the fun we all have when riding bikes, a film with a relaxed, humorous, and upbeat vibe.

“As always, I really hope that our fans and anyone who watches ‘This and That’ enjoys it and gets inspired to go out riding with a group of friends for some well-earned fun.”

There were some nature-based challenges for both riders and crew on the six-day shoot. The wind caused havoc in Blackpool. Wind is the enemy when it comes to street riding, even worse than rain. It was extremely difficult for Danny and Kriss to nail their tricks with the winds doing their utmost to blow them over. It was the Sandflies at Nescliffe that were a real problem. The whole crew were covered in itchy bites for weeks after the shoot.

Danny MacAskill, the 35 year-old Scot, is widely known as one of the most entertaining content creators the world has to offer.

Almost 12 years after his breakthrough video, ‘Inspired Bicycles – April 2009’, that included mind-blowing stunts filmed at iconic locations across Edinburgh, was uploaded to the internet, this and his many other video projects have racked up well over 300,000,000 views on various YouTube platforms.

The Ridge (October 2014), Danny’s last feature video filmed on Skye, where he tackles the ‘Inaccessible Pinnacle’ on the Cuillin Ridge, has been watched at least 74,576,094 times on YouTube!

Image attached: Scottish stunt riders, Danny MacAskill and Kriss Kyle, riding at Nescliffe in Shropshire for their new video, ‘This and That’. Please credit Dave Mackison

Further action and behind the scenes images (hi-res) can be downloaded from Dropbox. Please credit photographer – Dave Mackison: https://www.dropbox.com/sh/woqoxquqvmvrvhq/AADGIHzgD-F0Xh3E_FNBvBzda?dl=0

Video trailer can be downloaded from Dropbox: https://www.dropbox.com/sh/lngakyts6bw9nkw/AACt4_v5AUeKFV05_n_1rA5Na?dl=0

This and That film credits

Danny MacAskill and Kriss Kyle – This and That – presented by Endura

Directed and edited by Robbie Meade

Behind the scenes – Rory Semple

Bike helmets used in this film

Danny MacAskill and Kriss Kyle were keen to test the new Endura helmets on the shoot.

Bikes used in this film

Cameras used in this film

The bulk of the edit was filmed on RED Digital Cinema cameras, mainly on a MOVi stabalisation rig. This allowed the director to shoot in up to 8K resolution as well as capture amazing quality slow-motion clips.

Endura was founded in Scotland in 1993 with a no-nonsense commitment to advancing the performance and function of cycle apparel for all. As a maverick brand, it immediately launched a host of novel and challenging products that have gone on to earn iconic status globally and, in many cases, reset the benchmark of function and durability for the industry.

This philosophy and disruptive innovation has carried the brand from Scottish local hero to global market leader.

Endura has been selected consistently as clothing partner by many of the world’s top teams and riders on road, mtb and triathlon.

Their collaboration with leading experts in other fields such as aerodynamics and bike fitting ensures the product is constantly on the cutting-edge.

Danny MacAskill’s films may have been watched online by tens of millions of people, but he is the very last person to behave like a superstar. Instead, Danny will rock up unannounced at our headquarters with nothing on his agenda more pressing than a brew and a chinwag.

Endura and the street trials star share a proud Scottish heritage and strong mountain biking roots. It is a powerful, self-confident partnership but also great for Scotland and reinforces this wee country’s position as a hub of biking excellence.

Just as important as the big names of cycling are the Endura staff, who ride bikes and more importantly have a genuine passion for the sport and the products we produce. This shared passion creates a rich internal feedback stream which also plays an important role in the progression of the range ensuring the kit works for riders and pros alike.

At Endura we never take the easy route, never complacent, we are always thinking about the next part of the journey.