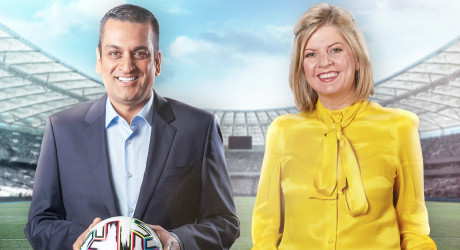 STV today unveils its cross-platform line-up of content for Euro 2020 – as new research shows one in five Scots (19 per cent) are looking forward to watching the national team’s Euro 2020 journey more than any other event this year.

However, Scotland’s first international tournament in over two decades doesn’t excite Scots quite as much as a good old-fashioned cuddle. The ScotPulse survey* found that permission to freely hug without social distancing is the most-anticipated event this year (26 per cent).

Regardless of whether or not hugging will be on the cards, STV is set to keep the Tartan Army up to speed with every nail-biting moment of Scotland’s Euro 2020 performance.

As Steve Clarke’s side takes on the Auld Enemy at Wembley on Friday 18 June, STV Sport’s Raman Bhardwaj (pictured) will front live coverage on STV from 7pm.

Joining Raman at Wembley to provide expert analysis and insight on the historic clash will be David Moyes, Kenny McLean and John Collins, while STV Sport’s Sheelagh McLaren (also pictured) will be bringing all the latest developments from the pitch side and Stefani Dailly will be reporting from the Euro Fan Zone in Glasgow Green.

David and Kenny will re-join Raman and Sheelagh at Hampden Park from 7pm on Tuesday 22 June for coverage of Scotland’s final group match against Croatia. Rory Hamilton and Kevin Gallacher will provide commentary for both games, which will also be streamed live and available for catch-up on STV Player.

STV will air and stream an additional 21 matches throughout the tournament, including the final on Sunday 11 July.

Plus, STV will whet fans’ appetites with an exclusive documentary, Scotland: We Can Boogie, on Monday 7 June. The half-hour special will be a love letter to Scotland’s national team, with members of the Tartan Army from all walks of life discussing what it means to see Scotland qualifying for its first major tournament since the 1998 World Cup. Previews available on request.

On STV Player, The Euros Daily Show will drop every day from 12 June and dissect all the latest developments as the tournament progresses. Viewers can also recap the qualification journeys and ambitions of each competing nation in new series, The Contenders: 2020, which is available to stream now.

Raman Bhardwaj said: “It’s almost here! Like every other football fan in the country, I’m counting down the days until that first whistle is blown and our summer of international football finally kicks off. With Scotland qualifying, this year’s Euros are going to be the most exciting international tournament the country has
experienced for years, and I’m really looking forward to bringing viewers all the action alongside some compelling insight and analysis from STV’s expert pundits. If you’re looking for the best place to cheer on the boys in blue this summer, look no further than STV.”