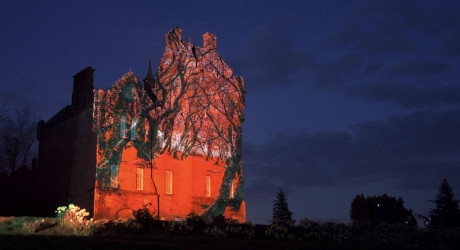 Shot using infra-red photography, the deserted township of Hallaig on Raasay is presented in a series of striking and memorable images.

These new works are accompanied by the words of celebrated poet, Sorley Maclean, whose poem of the same name brings the lives of the now gone families back to life.

With the ruins of Hallaig depicted in vibrant reds, these landscapes are brought back to life, bringing the tragedy of the Highland Clearances into focus.

They were recently exhibited at Streetlevel Photoworks in Glasgow, and as huge projections on Brodick Castle, Arran, in summer this year.

Designed in the Outer Hebrides, all profits from ‘Hallaig’ will go directly to Médecins Sans Frontières (Doctors Without Borders).

You can learn more about Hallaig and other forthcoming publications from Dusk Press at www.duskpress.com

Alex Boyd is a landscape and documentary photographer, printmaker and writer. His work is primarily concerned with the Scottish landscape.

His work is held in the collections of the National Galleries of Scotland, The Royal Photographic Society, the Royal Scottish Academy, the V&A in London and the Yale Centre for British Arts in the USA.

His first book, St Kilda – The Silent Islands, was recently shortlisted for a Saltire Award. His second book The Isle of Rust, a collaboration with writer, Jonathan Meades, was, like his first book, named as photography book of the year by The Scotsman.

Alex Boyd will have a solo exhibition ‘The Land of the Military’ at Stills Gallery in Edinburgh in October.

Image credit: Works from ‘Hallaig’ projected on to Brodick Castle on the Isle of Arran.