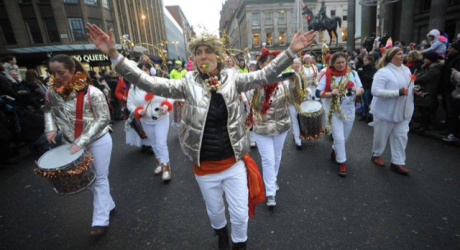 AFTER 30 years pioneering the women’s Samba movement in Scotland, Beat That’s musical director, Erin Scrutton, is hanging up her whistle.

One of Scotland’s longest-running Samba bands, Beat That, is winding up too, going out with a bang at COP26 on Saturday 6 November 2021, playing in the parade for the Extinction Rebellion campaigners.

Beat That is putting out a call to women Samba players, past and present, to join in the finale celebrations at COP26. Samba sisters are invited to sign up on the band’s team site (https://teamer.net/p/fbWeZgnIPx7Zslron) to join in.

They will be sent music files to listen to and will be invited to join rehearsals in Stirling in October in preparation for the COP26 parade on 6 November.

Banging the drum for 30 years

Popular with programmers and gig organisers across Scotland, Beat That regularly led the annual Glasgow Style Mile Christmas Parade and played at the Merchant City and West End festivals. They have been stalwarts at Paisley’s Sma’ Shot and Hallowe’en festivals – always game for a dress-up.

Back home, in Stirling, each year Beat That took to the stage and streets in Stirling for events like Reclaim the Night to Hogmanay celebrations.

A key part of the women’s movement and an expression of feminism, women’s Samba bands have featured in many International Women’s Day celebrations over the decades. To celebrate 100 Years of International Women’s Day, Erin led the drumming for an event called HumDrum when 70 women came together to sing and drum on the steps of Glasgow’s Royal Concert Hall, part of the Scottish Wave of Change.

Making a noise for women and LGBTQ+ rights

Beat That’s last foreign foray was leading the first Pride festival in Manilva in 2019 and they were booked to return when Lockdown hit and live events were put on ice in 2020. Beat That continued to play together right throughout Lockdown, keeping spirits high with a weekly practice for the two dozen women from central Scotland on Zoom.

A leader in her field

Over the years, Erin studied percussion in Brazil, Cuba, Salvador. A skilled player and composer, she has performed with Jools Holland, The Pet Shop Boys and Horse. She has taught thousands of beginners in community and corporate workshops and been a guest tutor for groups from the Isle of Wight to Ireland and Wales.

She has been MD with Stirling-based Beat That for 30 years and in that role has taught scores of women who have become part of the Beat That family and performed at festivals, parades and gigs from Belladrum to Berlin, Ireland to Italy.

Says Jenn Pow, the community group’s chair: “We were lucky to keep Erin as our leader for 30 years.

“She’s been a field-leader and built a career as a samba drummer when no such thing existed. We feel privileged that she stayed loyal to our group all these years.

“Erin is an amazing teacher – a patient and kind soul. Many of us would never have lasted this long without her. Being in the band has been one of the best things in my life.

“We’re a strong tribe and we’ve grown together, supporting each other through major milestones and life’s ups and downs. We’ve gone through births and deaths together… and many a party night. With Erin calling time, it just felt like the right time to hang up our sticks and wind up the group. It’s been a blast and I’ve made friends for life.”

Erin has a shelf dedicated to her as part of Glasgow Women’s Library’s Women on the Shelf project, recognising all she has done to ignite the women’s drumming movement in Scotland.

Film-maker, Dianne Barrie, has been commissioned by the band to document the COP26 finale and capture stories that recall the essence of the 30 year wave of change.