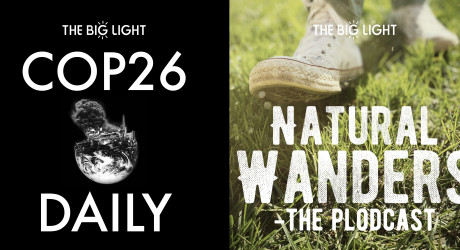 NEXT week, all eyes and ears will be on Glasgow for COP26 – the UN’s urgent call to action in the fight against climate change.

From Sunday 31st October to Friday 12th November, The Big Light’s COP26 DAILY podcast, will immerse you in the stories, events and key moments of the conference.

With more than 190 world leaders descending on Glasgow, alongside tens of thousands of delegates and activists, reporter/producer, Cameron Angus Mackay, has an access-all-areas pass to the heart of the conference, bringing listeners reports, daily updates, behind the scenes interviews and all the latest news.

Cameron says: “I am so excited about being in Glasgow to report on COP26 – a pivotal gathering for discussing the world’s fight against climate disaster. I’m going to be publishing daily episodes at 6pm (available on all podcast platforms) and taking you to the heart of the summit.”

For further information and audio links, go to: thebiglight.com/cop26

Natural History film maker, Mandi Stark, is launching series two of her wonderful ‘plodcast’, NATURAL WANDERS, with two special episodes – featuring Gordon Buchanan, one of the UK’s best known wildlife cameramen and Ben Garrod, evolutionary biologist, primatologist and broadcaster. In the ‘plodcast’, Mandi and her guest go for an exploratory plod around a wild place they love. The launch of series two (Monday 1st November) coincides with COP26.

Mandi says: “I am delighted to be joining forces with The Big Light network for season 2 of NATURAL WANDERS. It’s a privilege to be sharing a platform with such well known voices and fantastic to strengthen the Scottish connection.”

For further information and audio links, go to: thebiglight.com/naturalwanders

The Big Light Network (www.thebiglight.com): Our flagship podcast, Talk Media, is regularly listed as a top show in the Apple News Commentary charts, ahead of international big hitters from the world of journalism.

Our powerful personal memoir series, Ida Schuster’s Old School, was nominated for a prestigious British Podcast Award in 2021. Ofcom, the UK media regulator, recognised The Big Light network as a new UK media player in their latest report. The network has an international audience with listeners in more than 90 countries

Cameron Angus Mackay: Cameron is a podcast producer and broadcaster with a strong focus on arts, entertainment, travel and current affairs. He has extensive experience in a variety of broadcast and performance media. Cameron produces podcasts for The Big Light network and develops on-air reports for BBC Radio Scotland.

Mandi Stark: Born in Fife, Mandi Stark is a Bristol-based wildlife filmmaker specialising in blue-chip natural history series. Mandi has TV credits including David Attenborough’s ‘The Hunt’ for BBC One and ‘Our Planet’ for Netflix. Mandi created ‘Natural Wanders the Plodcast’ in 2020, with fellow wildlife filmmakers Tom Jarvis (producer) and Charles Dyer (editor).