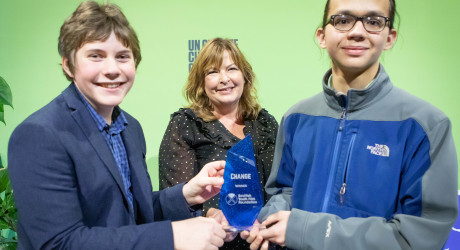 Broadcasting on the COPTV YouTube channel, the show is also live streaming across schools in Scotland and the USA.

It is being supported by conference partner, ScottishPower.

SYFF co-founder, Scott Mackay, said: “It is vital that voices of young people all across Scotland are heard at COP26.

“Aged between 16-21, our young filmmakers, journalists and presenters have been shooting and editing content packages all week and their first live interview was with WWF director, Lang Banks.

“There was a slight sound issue, just a wee echo, that was quickly sorted and did not quell their determination to be heard.”

Miranda Richardson presented to Greta McMillan, 18, for her film, Change Direction, and said: “Aimed at governments and individuals, it asks why things are being over-complicated when the solutions are right there?

“Why are we not acting as a society and as individuals? Especially when everyone knows what needs to be done. Finally, it repeats over and over again the simple phrase:  I want to help.”

Ms Hyslop explained: “This is a gorgeous animation.

“The skill of the animation, the timing of the piece – combined with the use of music and colour – produced a powerful statement on the dangers that face our world and our society.”

Some of the COP TV packages are pre-recorded and edited right up to the last minute and comprise a mix of interviews with scientists, politicians and celebrities, footage of conference highlights, behind-the-scenes and protest marches.

Sam Gardner, head of Climate Change and Sustainability at ScottishPower, said: “It’s inspiring to see this young TV crew so energised and passionate about driving forward positive change and tackling the climate crisis.”

The five, one hour-long broadcasts will go out to a global audience between 5-6pm each evening from Monday, November 8 – Friday 12.

Scottish Youth Film Foundation is a charity which aims to improve the life outcomes of young people in Scotland, through film.

We do this in three ways: our annual festival, through film education in schools, and through outreach film projects which target young people who would not normally get the chance to make a film.

We work with the hardest-to-reach young people, with 30 per cent of our work in the top five per cent most deprived areas in Scotland.

SYFF has worked with thousands of young people since launching in 2014. Over 800 films made and over 650 award submissions have been received.

ScottishPower is one of the the first integrated energy companies in the UK to generate 100 per cent green electricity. A principal partner for the United Nations climate change conference – COP26

ScottishPower is investing £10billion in the UK over five years – £6 million every working day – to double its renewable generation capacity and drive forward de-carbonisation.

The Foundation was initially set up to protect species and – with one in six species currently at the risk of extinction – there work is vital.

Foccusing on helping to build momentum among businesses, the government and the public to secure climate action whilst demanding that that the UK stops subsidising fossil fuels, makes the tackling the climate crisis a national priority, and speeds up our transition to 100 per cent renewable energy.

This year, the Scottish Youth Film Foundation is running a programme on the theme of Climate and COP. Its aim is to link up young people in Scotland who care about their planet with other young people around the world with the same goals and ideas. Eleven young people from all over Scotland are creating COP TV, a magazine-style show which will be aired for one hour over five nights during the last week of COP 26.

Here is the background story – Meet the team

For interview requests of any of our fabulous COPTV young crew, please call Lynn McAdam on 07967804257 or email lynnmcadam@me.com

MEDIA RELEASE issued by The Wee Partnership. You too can share your stories (aka press or media releases), on this site. Email here for more information.