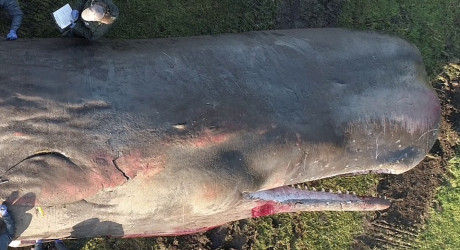 CHANNEL 4 has commissioned STV Studios to produce a TV event and critical investigation into one of the most arresting victims of our climate emergency – the whales that wash up and die on our shores in seemingly greater numbers, year after year.

More than 12,000 stranded cetaceans have been logged in the UK since 1990, and in this 90-minute programme – titled, What Killed the Whale? – explorer and biologist, Ella Al-Shamahi, will set off across the country to find out what is going on and who or what is to blame. How much is pollution, fishing, ship strikes and other human activities responsible for this escalating crisis?

Al-Shamahi will be embedded with the country’s leading frontline science organisations as they respond to fatal large whale strandings across the UK, in an unflinching examination into the devastating causes of their deaths.

The production team will be on-site capturing the graphic autopsies of these giants of our oceans – each one an environmental crime scene harbouring clues as to why they died. The team will follow the cutting-edge lab analysis, in a UK-wide search for answers that will reveal the true impact humans are having on our oceans, as well as the pioneering solutions that could still save them before it’s too late.

Jonah Weston, Science commissioning editor for Channel 4, said: “Whale strandings are on the rise and alarmingly frequent all around the UK coast. This unique TV event sets out to find out what’s really going on and just what we can do about it. With the seas around Britain and the world under pressure like never before, it’s a pressing question with huge consequences for the planet’s last true wilderness and the incredible creatures who call it home.”

Craig Hunter, creative director of Factual for STV Studios, said: “There has never been a more critical time to take a temperature check on the health of our oceans and we will be face-to-face with the incredible whales who are the tragic victims of our climate emergency. We’re thrilled to be working with Channel 4, Ella and the frontline responders to create what will not only be a shocking TV event, but a significant and timely investigation.”

What Killed the Whale? will be distributed by BBC Studios.