Media release: Banging the drum for women for 30 years – add to the story 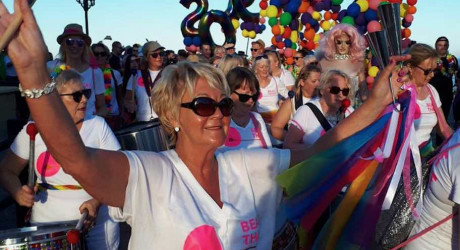 REMEMBERING 30 YEARS OF STIRLING’S BEAT THAT

CALL TO PAST PLAYERS

BEAT THAT, Stirling’s women’s samba band closed down at the end of 2021 when its musical director of 30 years, Erin Scrutton, hung up her whistle.

Now, A Quiet Revolution, a Scottish charity is planning to capture the band’s ‘herstory’ on film and is holding a ‘Discovery’ session at Macrobert Arts Centre on 24 April to get a sense of the range of the band’s stories to help determine how to approach filming.

This first stage – the Discovery phase – is funded by Stirling Council’s Community Pride Fund, A Quiet Revolution and Macrobert Arts Centre. The charity is applying to Year of Stories for funding to run a second session at the end of July with women drummers from across Scotland to further explore their shared ‘herstory’.

“The storytelling, film and archive project aims to capture the unique and untold 30 year story of the women’s samba movement in Scotland exploring its legacy and impact on Scotland’s cultural heritage,” said the charity’s chair, Jane Alcorn, who was one of the founders of Beat That.

“Through women drummers’ stories, we’ll share and pass down an unique slice of contemporary culture.

“We imagine the story will challenges perception of women, celebrate diversity and model positive images of women, LGBTQ+ people and disabled people. It will promote creative ageing. Macrobert Arts Centre have invited us to screen the film – if we get funding for it – at their annual Docufest in 2023, marking the 30-year anniversary of samba bursting onto the streets of Scotland.”

The charity’s chair, CEO and three trustees have been members of Stirling’s Beat That, recognised as Scotland’s longest-running women’s samba band.

Trustee, Erin Scrutton, is the composer/performer/ teacher/musical director who ignited the women’s samba revolution in Scotland 30 years ago and led Beat That for three decades. She seeded bands across Scotland, inspiring thousands of women. Overseeing the commission for the charity is trustee, Murdoch Rodgers, a multi-award-winning ethnographer and documentary film-maker (BBC Panorama).

Too often, women’s stories have gone unnoticed and unrecorded. We want to change this imbalance by capturing this important 30 year herstory.

Samba as a community activity has been a powerful contributor to wellness and creativity for thousands of women in Scotland for 30 years. They drum for fun, to express their creativity, work through their emotions and life’s challenges, form bonds, celebrate sisterhood, support each other, stand up for womankind.

Many who never intended to perform have amazed themselves, taking to stages at events and festivals at home and abroad, growing confidence and skills, surprising themselves and challenging perceptions. Scotland’s women’s samba bands have led Gay Pride marches, Anti-War protests and Climate Change marches over 30 years.

They’ve performed on TV, made videos and CDs, had Top Ten singles with the Pet Shop Boys, opened for Elton John and George Michael at a London Stonewall fundraiser. Scottish sambistas were the first women in the world to perform at Barcelona’s Correfoc fire festival. These women have transformed their own and others’ expectations of their potential and been ambassadors for women’s freedom at home and internationally.

Over three decades, thousands have had a go. Women’s samba has grown to be a symbol for feminism, activism, inclusivity, LGBTQ+, appealing to women of all ages, women of colour and accessible to women with disabilities. Bringing women together tackles social isolation and builds community resilience. The rewards are massive for women’s health and wellbeing, for Scotland’s creative ecology and for broader society.

MEDIA RELEASE issued by A Quiet Revolution. You too can share your stories (aka press or media releases), on this site. Email here for more information.