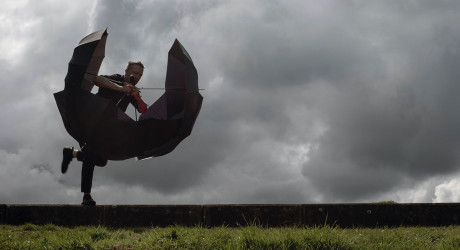 A NEW dance film, made in Scotland, premieres this weekend in Los Angeles as part of the prestigious Dance Camera West Festival.

Water & Man is the first collaboration between choreographer Rob Heaslip and director Katrina McPherson. Billed as ‘a screendance ritual for the presence and absence of water’, Water & Man was filmed in Edinburgh and on location in the Pentland Hills. It has a soundtrack by UK composer, Philip Jeck (1952-2022).

Rob Heaslip is an Irish choreographer based in Scotland. He is also a dancer, movement director and teacher creating his own ensemble work, as well as collaborative works. As an artist, he is interested in how he can re-imagine human rituals for the viewer of today; asking, “how can the performing body be a vessel for intertwining movement, voice, and design?”.

For over three decades, Edinburgh-based Katrina has been a leading figure in the international field of ‘screendance’, an experimental artform that combines dance and moving image media. She has filmed and directed many short films, documentaries, installations, and interactive works which have been screened at numerous international festivals, galleries, and venues.

Water & Man came about through funding provided by Creative Scotland to Heaslip, in which he set out to re-locate his live-performance practices on the screen.

He said: “It is always a pleasure to create work of such high calibre here in Scotland, with our arts sector so rich and diverse.

“Water & Man stands out in both originality of concept and quality of design, benefitting from a wealth of talent across artistic, production and administrative teams. Many thanks to our funders Creative Scotland, and supporters Summerhall and Dance Base Edinburgh.”

Dance Camera West is an annual international festival and celebration of screendance, held at renowned arts venues throughout Los Angeles, with the aim of bringing dance to the world beyond the stage and through the language of film. One of the longest-running and most highly-regarded dance film festivals in the world, the event takes place at cinemas and theatres across Los Angeles. It is a festival at which filmmakers and choreographers are keen to have their work showcased.

Two years ago, Katrina was the recipient of a ‘Career Achievement Award’ at Dance Camera West, an award which she picked up in person in January 2019. She is delighted that this newest work will be premiered at the festival.

She said: “The organisers of Dance Camera West have a real knack for programming innovative new screendance works and presenting them in the context of more mainstream cinema culture, opening the artform to whole new audiences. It’s a real thrill to have Water & Man premiere there.”

Water & Man will screen in front of a live audience at the Theater Raymond Kabbaz on 2nd April 2022.

Later in the same month, the film will have its European premiere at the Screendance Festival in Stockholm. Dates for the first Scottish screenings are still to be confirmed.

MEDIA RELEASE issued by Colin McPherson. You too can share your stories (aka press or media releases), on this site. Email here for more information.