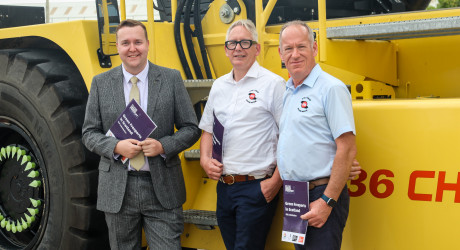 MOSSEND International Railfreight Park (MIRP) and North Lanarkshire Council have joined forces, alongside other private and public partners, to deliver their Clyde Green Freeport bid for the Glasgow region to become one of Scotland’s two green freeports.

The ambitious proposal is forecast to create up to 30,000 new jobs, attract £2.5 billion of capital investment and transform nearly 600 hectares of vacant and derelict land in key locations across the Glasgow region. This would result in significant amounts of new jobs and benefits to local businesses in North Lanarkshire.

North Lanarkshire Council leader, Jordan Linden, said: “Clyde Green Freeport would deliver a multi-billion pound investment for the Glasgow City Region economy, bringing significant high-quality jobs to North Lanarkshire as well as opportunities for businesses here to grow their markets across the UK and beyond.

“I would ask businesses in North Lanarkshire to look at the opportunities for global trade that Clyde Green Freeport would bring to the area and to your own enterprise, large or small, and back our bid to help make it a reality.”

MIRP is home to a major decarbonising rail freight hub and terminal and Clyde Green Freeport would see the regeneration of 283 hectares of land through £17 million of investment unlocked by tax benefits and, in the longer term, £300 million to develop the site and create the infrastructure needed.

“Over the 40-plus years we’ve been at Mossend, we’ve employed locals and worked with local partners and clients to build and expand our infrastructure and to provide freight logistics services between Scotland and England.

“In the success of our bid, over 500 jobs will be created at Mossend and business generated that will give our local economy the boost it needs, particularly coming out of the pandemic and moving forward in leaving the EU.”

The outcome of the formal bid, which was submitted to the Scottish and UK governments in collaboration with partners at Glasgow Airport, Peel Ports – Clydeport and Glasgow City Region councils, is expected to be known later in the summer.

Businesses across North Lanarkshire and the wider Glasgow region are asked to back the bid and support the ambitious Clyde Green Freeport proposal.