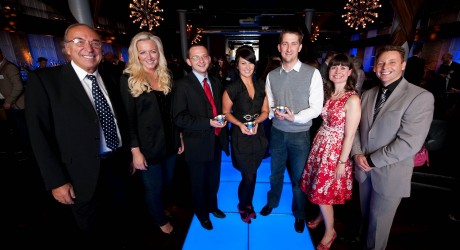 Lawrence Broadley (26) and Kevin Fox (25), founders of LAT 56, a Scottish award winning product development company, were announced as the winners of the ‘Business Innovation’ 2010 award at a ceremony in Glasgow last night.

The former Strathclyde University graduates launched LAT 56 in 2007, specialising in the design and manufacture of travel products.

Keen outdoor sports enthusiasts, their first product was a folding surfboard, before they moved on to the luggage market.

Recognising the potential in the latter, Broadley and Fox who are both from Glasgow started work on a unique and innovative range of luggage solutions for business travellers.

Initial business start up costs were covered by PSYBT, who provide advice and funding to young people aged between 18-25 year-olds looking to launch their own business.

Together with funding from other sources and additional accelerator funding from PSYBT’s Growth Fund in June 2009, LAT 56 were able to complete the development of their new ‘Rat Pack’ and ‘Red Eye’ compact garment bags.

The garment bags, which are aimed at the minimalist traveller, feature a patented Torso Protection System to prevent creasing and a unique identification tracking system should luggage go astray.

Since the products were showcased at the world’s largest travel goods trade show in Las Vegas in March this year, Selfridges department store in London is stocking the range, and distribution rights have also been secured in Ireland, Germany and Austria.

Work is now beginning on a full luggage range.

Four other young entrepreneurs were also recognised for their outstanding business success at the awards ceremony. Marion Lithgow (25), founder of A1 Transport of Ayr received an award in recognition for Outstanding Business Growth.

Ms Lithgow owns a fleet of 25 vehicles and employs 23 full-time drivers who provide passenger and courier transport throughout Ayrshire.

Joint winner of the Business Growth award is Angela Stewart (31), founder of Angela Stewart Creative based in Muir of Ord. Ms Stewart and her partner, Grant, provide high quality design, management and production expertise including styling, lighting and flower services to private and corporate events clients located in London, central and Northern Scotland.

The Determination to Succeed award was won by 29 year-old Wojciech Banaszek who has successfully overcome the considerable challenges associated with starting a business in a new country, to run a successful Polish café and deli in Edinburgh.

All the winners were presented with specially commissioned silver quaichs by Gio Benedetti of Wallace Cameron.

Says a spokesperson: “To date, an investment of £2.19 million has funded 171 Growth Fund businesses and allowed them to raise a further £3.9 million of funding to implement their growth plans.

“Collectively, the recipients predict an increase in turnover of £22.8 million in the 12 months and the creation of 273 jobs.”

Congratulating the winners, Mark Strudwick, chief executive of PSYBT, said: “Growth Fund loans provide young people in business with a springboard for immediate expansion, as well as the opportunity to create employment. Financial backing also helps inspire ambition, innovation and determination to succeed and our award winners tonight are shining examples of what young entrepreneurs in business can achieve with such support.”

Issued on behalf of PSYBT by Jen Nash, Panache Communications t. 07971 466 220. For further information contact Margaret Gibson or Emma Fitzpatrick at PSYBT head office on Tel no. 0141 248 4999.  Or visit the PSYBT website at www.psybt.org.uk

The Growth Fund was launched in 2002 thanks to an initial pledge of £125,000 from Sir Tom Hunter and further backing from Scottish Enterprise, the Highlands and Islands Enterprise, ERDF and private donations.

The loan fund helps PSYBT supported entrepreneurs who have been in business for at least one year and want to expand. Applicants can apply for either a ‘Development Loan’ of up to £10,000 or an ‘Accelerator Loan’ of between £10,000 and £25,000.