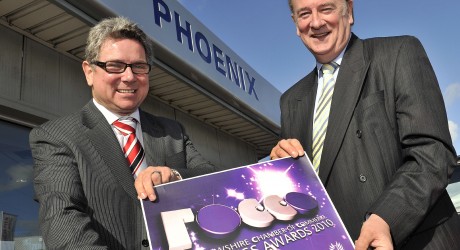 THE Phoenix Car Company has been announced as the Main Sponsor for The ROCCOs 2010, the annual business awards for Renfrewshire Chamber of Commerce.

Commenting on the announcement, Renfrewshire Chamber president, Tom Johnston, said: “We are delighted to have Phoenix as our main sponsor.

“They are a fantastic local company with a name synonymous with ‘quality’. Many thanks to John McGuire and the Phoenix team for their continued support for their local Chamber.”

Now in its seventh year, the ROCCOs are by far the main business event in Renfrewshire.

Held annually at The Normandy Hotel, the event attracts just under 500 guests including MSPs, MPs, council and business leaders. Almost 60 companies entered this year, each hoping to win one of the prestigious ten ROCCO Awards, with the shortlist being announced last week.

Chamber chief executive, Bob Davidson, added: “The ROCCOs are not only a ‘celebration of business excellence in Renfrewshire’ but the event itself raises thousands for local charities – with over 40 donations been made over the last three years alone.”

This year the main ROCCOs Charities are Erskine and Loud’n’Proud.

The night itself on Friday 12th November is hosted by Fred MacAulay with music from Renfrewshire’s resident School of Rock, Loud’n’Proud.

Commenting on the events rapid ticket sales, president, Tom Johnston, further added: “With six weeks to go, there are only six tables left from almost 50 – proof that Renfrewshire is a great place to do business.”

For more information on the ROCCOs please visit www.roccoawards.com

MEDIA RELEASE posted by the Renfrewshire Chamber of Commerce. You too can post media releases (aka press releases) on allmediascotland.com. For more information, email here.