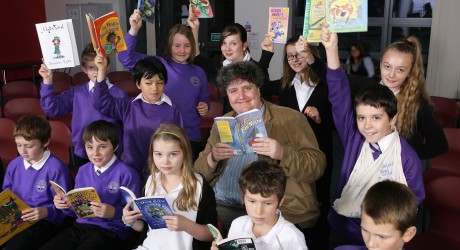 LOCAL pupils got their creative juices flowing on Tuesday, October 12th in an interactive workshop with acclaimed children’s author, John Fardell – their prize for winning the 2010 ScottishPower Story Swap Shop.

Primary six and seven pupils from Duloch Primary School in Dunfermline gathered for a session with the Edinburgh International Book Festival author, where they received guidance about fiction writing and were encouraged to create their very own picture story.

The pupils drew their own imaginative characters which included XP3,a cloaked creature with ‘ion blasting’ talent, and Bobby, a baddie with the ability to zap human memories with a special antennae helmet.

This is the second year ScottishPower has held its Story Swap Shop which is an initiative held in partnership with the Edinburgh International Book Festival, encouraging children to recycle their old books by swapping them with their classmates in order to raise money for an environmental charity.

Duloch Primary School was randomly selected to win the competition after holding its own swap shop in June and raising £111.00 for Friends of the Earth Scotland.

Each child was asked to donate 50 pence to take part.

John Fardell – the author selected to visit the winning school – has written several books for children, including ‘The Secret of the Black Moon Moth’, which has been shortlisted for the Royal Mail Awards in the Younger Readers 8-11 years category.

Prior to becoming an author, John made his living as a cartoonist and puppeteer.

ScottishPower group sponsorships manager, Heather McDonald, said: “Well done to the pupils of Duloch Primary School for winning this year’s ScottishPower Story Swap Shop. As well as raising valuable funds for Friends of the Earth Scotland, the pupils have also learned about the importance of recycling by exchanging their used books.

“The aim of this initiative is to encourage young people to save energy by switching off their computers and picking up a book – an activity that is fun as well as educational.”

Deputy headteacher, Jackie Carswell, said: “The children thoroughly enjoyed their visit from John Fardell this morning – he has inspired them all with tales of his own adventure stories and they are now keen to go away and start writing.

“The ScottishPower Story Swap Shop was a brilliant initiative for the children to get involved in and we are absolutely delighted to have won. We are always trying to reinforce messages to pupils about the importance of being environmentally friendly, and this really encouraged the pupils to take ownership themselves and learn about recycling first hand.”

Schools across Scotland were invited to hold a book swap before the end of the summer term. Children from 27 schools exchanged thousands of books with their classmates throughout the months of May and June and raised over £940 for Friends of the Earth Scotland.

For background on ScottishPower log onto www.scottishpower.com and more details about Friends of the Earth Scotland can be found at www.foe-scotland.org.uk. Information on the Edinburgh International Book Festival can be found at www.edbookfest.co.uk.

Issued by The BIG Partnership on behalf of ScottishPower.