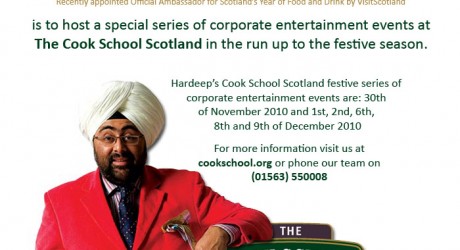 CELEBRITY broadcaster, journalist and raconteur Hardeep Singh Kohli is to host a special series of corporate entertainment events at The Cook School Scotland in the run up to the festive season.

Recently appointed an official ambassador for Scotland’s Year of Food and Drink, Glaswegian Hardeep, who was runner-up on the first series of Celebrity Masterchef, is a keen semi-pro cook who is currently performing to sell-out audiences throughout the UK on his ‘The Nearly Naked Chef’ show.

At The Cook School Scotland Hardeep will lead corporate guests through a series of cooking classes on how to create the perfect curry, encompassing a starter, main course and sweet – and there will be plenty of time for a chat too!

Hardeep said: “I’m really looking forward to these events and particularly excited to be following in the footsteps of some of the best known chefs in the country who have led classes there.

“Headed by three Michelin-starred chef, Steven Doherty, The Cook School Scotland has a well-deserved reputation for excellence within the culinary trade and the format of the day has been designed to give corporate guests a different and entertaining day out with a relaxed, informative and fun cooking experience.”

Guests will arrive in the morning to meet Hardeep over coffee/tea and shortbread. Throughout the day, they will sample all of the dishes they make and then, at lunchtime, will have the chance to eat with Hardeep and relax with some wine. At the end of the day, guests will be given a bag for life to take away, with an apron, folder and recipes inside.