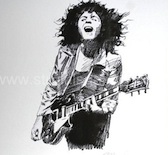 BILL Legend, the last surviving member of the 1970-73 line-up of rock group T.Rex, will be in Aberdeen on Friday (January 7) for the opening of his first-ever art exhibition in the city and his final music event in the UK at the Artists Gallery, Holburn Street, Aberdeen.

“It was Marc Bolan who spotted Bill, while he was playing with a group called Legend, and asked producer, Tony Visconti, to get him to join T.Rex.

“It was also Bolan who suggested the band’s new drummer should adopt the stage name, Legend, as a reference back to his previous group.”

Bill Legend’s exhibition features artwork and sketches, including many from his time as drummer with T.Rex.

Among the artworks to be featured will be limited edition signed artwork for the T.Rex album ‘Electric Warrior’.

Also on show will be an early set of drums used by Bill Legend.

On Friday evening, Bill Legend and his band will play his final musical set in the UK, for an invited audience at the Artists Gallery.

He emigrates to California next week.

Bill, whose real name is William Fifield, originally combined his early career as a commercial artist with his role as drummer for various bands.

The exhibition will be open from Saturday (January 8) to Saturday, February 5 at the Artists Gallery, 403 Holburn Street, Aberdeen AB10 7GS.

The Artists Gallery is a social enterprise that provides training and work opportunities for people with a disability.

The gallery is the exclusive Scottish agent for the world’s leading suppler of signed limited edition album fine art.

MEDIA RELEASE posted by Ken McEwen PR. You too can post media releases (aka press releases) on allmediascotland.com. For more information, email here.