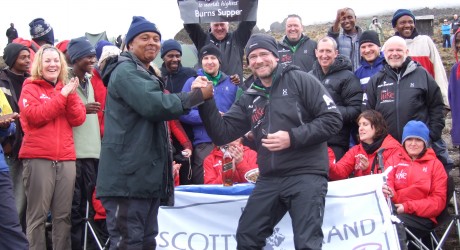 EXPEDITION sponsor, Simon Howie, the award-winning Scottish butcher and entrepreneur, has congratulated a delegation of intrepid climbers on the success of their attempt to create the World’s Highest Group Burns Supper.

Says a spokesperson: “The event saw Michelin-star chef, Andrew Fairlie, prepare a special Simon Howie haggis for comedian Fred MacAuley and fellow climbers at the summit of Kilimanjaro which, at 5,895 metres, is the highest mountain in Africa.

“Organised by the Hospitality Industry Trust Scotland, the HIKE (HIT Scotland’s Intrepid Kilimanjaro Expedition) involved people from across the service and hospitality industry in an effort to raise £150,000 for the charity.”

Butcher, Simon Howie, said: “Congratulations to all the climbers who took part in this tremendous expedition. I’m delighted to learn that they have succeeded in achieving their objective to hold the world’s highest group Burns supper at the summit of Kilimanjaro to raise funds for a very worthwhile cause.

“I’m particularly thrilled that our specially prepared Kilimanjaro haggis proved such a hit with the team and to have played a part in treating them to such a well-deserved taste of Scotland in one of the most exotic locations!”

Simon Howie was named Entrepreneur of the Year in 2008 by the Entrepreneurial Exchange when he was praised for his serial entrepreneurship which has seen his business interests expand far beyond his successful butcher’s empire which supplies many major supermarkets.

PAGODA Public Relations is looking to hire PR assistants. The vacancies can be found, here, on...

Made here: The Ideal Scotsman, BBC Scotland
November 22, 2019 · Comments Off

THE Ideal Scotsman is a sideways look at the changing role of masculinity in Scottish society....