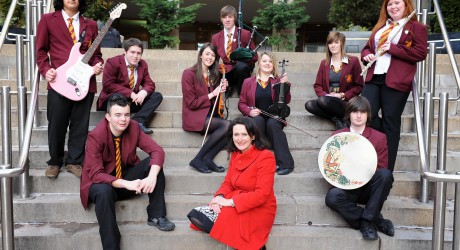 TALENTED pupils from Montrose Academy in Angus scooped top place in a nationwide music competition to play the main stage at Celtic Connections and in the coveted Danny Kyle Open Stage competition.

The group of nine gifted youngsters outperformed schools from across the country in the ScottishPower Powerful Performance contest and secured the opportunity to play at one of the biggest folk, roots and traditional music festivals in the world.

Montrose Academy pupils performed three songs on the main stage at the Glasgow Royal Concert Hall on 27th January 2011, as part of the final Education Concert of the festival.

Their set included Rattilin Roarin Willie and Atholl Highlanders, I’m shipping up to Boston by Dropkick Murphys and Runaway by The Corrs. They also performed four songs on the Danny Kyle stage with the addition of Suburban War by Arcade Fire to their repertoire.

The artistic teenagers had an incredible experience at the festival with their performance on the Danny Kyle stage also being broadcast live on Celtic Music Radio. In addition, the musicians were interviewed by the station about their win.

ScottishPower, principal sponsor of Celtic Connections, has supported the festival since 2007.

The company’s head of Corporate Social Responsibility, Ann Loughrey, was delighted that the pupils enjoyed their experience, and was pleased that the school’s performances went down so well.

She said: “Montrose Academy’s superb version of Rattlin’ Roarin’ Willie and Atholl Highlanders secured them as winners of the ScottishPower Powerful Performance and their rendition of the song went down very well at the festival.

“The pupils have certainly proved themselves as worthy winners with their exceptional performances. We’re delighted to have selected them as the ScottishPower Powerful Performance winners for the 2011 Celtic Connections festival.

“At ScottishPower, we pride ourselves on encouraging young people and local communities to embrace Scottish culture and tradition.

“The arts are especially important in highlighting the heritage of a country and are an enjoyable and entertaining way of communicating with audiences. We’d like to thank each and every school that entered for their participation and effort in the competition.”

Jacqueline Cockburn, music teacher at Montrose Academy, was thrilled with the school’s performances and day at the festival.

She said: “Our pupils were very excited about spending the whole day at Celtic Connections and participating in the festival as winners of the ScottishPower Powerful Performance.

“They worked very hard to achieve the high standard required for the contest and the whole school is delighted that it paid off.

“The pupils were slightly nervous before their performances but as soon as they got on stage their nerves died down and they played a fantastic set.  We are all very pleased at the response the band received.”

“We were delighted that Montrose Academy performed at Celtic Connections.

“They showcased their talent to hundreds of school children and music fans by playing on the main festival stage in the Glasgow Royal Concert Hall and by taking part in the Danny Kyle Open Stage competition.

“These were very high-profile appearances and our audiences thoroughly enjoyed their performances.”

The festival brings artists from around the globe to perform in Glasgow each January.

This year, Sir Tom Jones performed at the festival, along with other reputed artists such as Eddi Reader, Fran Healy and Joel Plaskett.

Celtic Connections 2011 was launched on Thursday January 13th with a torchlight parade in Glasgow’s George Square and finishes its run in Sunday 30th January.

Issued by The BIG Partnership on behalf of ScottishPower.